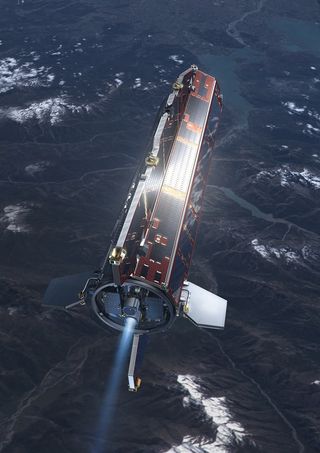 The sleek aerodynamic design of GOCE sets it apart from most other satellites. The unique 16 foot (five meters) long satellite had none of the usual moving parts. The whole satellite is a single composite gravity-measuring device.
(Image: © ESA/AOES Medialab)

A European gravity-mapping satellite has run out of fuel and will likely die a fiery death in Earth's atmosphere about two weeks from now, officials say.

GOCE, which ESA officials dubbed the "Ferrari of space" because of its sleek design, will spiral closer and closer to Earth over the next two weeks, finally burning up sometime in early November. [Photos: Europe's GOCE Gravity-Mapping Satellite in Pictures]

"While most of the satellite will disintegrate in the atmosphere, some smaller parts are expected to reach Earth’s surface," ESA officials wrote in a mission update today (Oct. 23). "When and where these parts might land cannot yet be predicted, but the affected area will be narrowed down closer to the time of re-entry."

The $450 million GOCE satellite launched in March 2009 on a planned two-year mission to map the variations in Earth's gravity field. The spacecraft consumed fuel at a much lower rate than expected, however, allowing GOCE to continue gathering data far beyond its expected lifespan.

The mission's scientific returns have been substantial, ESA officials say. For example, researchers have used GOCE data to better understand ocean circulation patterns and to construct the first global, high-resolution map of the boundary between Earth's crust and mantle.

"The outcome is fantastic. We have obtained the most accurate gravity data ever available to scientists," Volker Liebig, ESA’s director of Earth Observation Programs, said in a statement. "This alone proves that GOCE was worth the effort — and new scientific results are emerging constantly."

GOCE launched to an extremely low orbit, initially circling Earth at an altitude of 159 miles (255 kilometers). (For comparison, the International Space Station orbits our planet at a distance of about 249 miles, or 400 km). But in August 2012, GOCE's handlers lowered its orbit even more, bringing it down to just 139 miles (224 km) to improve the accuracy of the spacecraft's measurements.

The GOCE satellite is 17 feet (5.2 meters) long and weighs about 1 ton (907 kilograms). ESA's Space Debris Office is tracking the spacecraft's orbit and will issue re-entry predictions at various times over the next two weeks, officials said.

GOCE won't be the first big satellite to fall from space. Chunks of NASA's Skylab space station famously rained down on Australia in 1979, for example, and NASA's defunct Upper Atmospheric Research Satellite slammed into the Pacific Ocean in 2011.