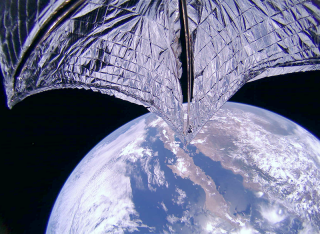 The bread loaf-sized spacecraft, which was built with the support of crowdfunding efforts, launched to space aboard SpaceX's Falcon Heavy rocket on June 25, 2019. Flight controllers at Cal Poly San Luis Obispo in California began deploying the craft's solar sail Tuesday at 2:47 p.m. EDT (1847 GMT), and the sail was fully deployed by 2:50 p.m. EDT (1850 GMT).

When photons hit the square solar sail, which is made up of four triangular, aluminized Mylar sections, the pressure pushes the craft forward. With no propellant other than sunlight, LightSail 2 is now successfully orbiting Earth with the power of photons alone. While solar photons have no mass, they have momentum, and when they reflect off of the solar sail, some of their momentum is transferred to the craft. This creates a bit of thrust which (very gently and slightly) continuously pushes the craft forward.

"Yesterday, we successfully set sail on beams of sunlight. Thanks to our team and our tens of thousands of supporters around the world, the dream started by The Planetary Society's founders more than four decades ago has taken flight," Bill Nye, CEO of The Planetary Society, said in a statement.

After the sail deployed, telemetry data from LightSail 2 showed that the craft's tiny motor was rotating correctly. Early data shows that the craft is already turning its sails to the sun so that, once per orbit, the sun will give the spacecraft an extra push.

"The successful deployment of the solar sail and the onset of sail control completes our critical post-launch phase. Now, we are prepared for the solar sail's mission, to track how the orbit changes and evaluate solar sailing performance," LightSail 2 project manager David Spencer said in the statement.

Downloaded yesterday (July 24), images taken by the craft show the solar sail unfurling and the craft's spectacular view of planet Earth. LightSail 2 is equipped with two fisheye camera lenses, each of which can image more than half of the solar sail.