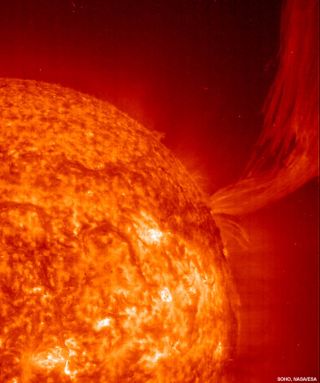 NASA has devised a new tool in the battle against massive eruptions from the sun: an early warning system to protect electrical grids on Earth from extremely powerful solar storms.

The new project, called Solar Shield, is designed to predict the severity of powerful sun storms at specific locations on Earth to help power companies plan responses and limit the potential damage to their equipment.

"It amounts to knowing 'something is coming and it may be big,'" said project leader Antti Pulkkinen, a research associate at NASA's Goddard Space Flight Center in Greenbelt, Md., told SPACE.com. But Solar Shield should provide "much more specificity."

The chief target for NASA's Solar Shield are huge sun eruptions called coronal mass ejections, or CMEs, which can shoot off billions of tons of  plasma and charged particles.

The sun is currently going through a more active phase of its 11-year solar weather cycle. It has been emerging from a prolonged lull in activity and is expected to hit the peak of the current cycle in 2013.

When the magnetic field associated with a CME encounters the Earth’s magnetic field, the two merge and an enormous amount of energy is transferred to the geomagnetosphere. This resulting current can affect astronauts or satellites in space, as well as commercial power grids.

If the CME is strong enough, the grids can become overburdened or damaged. The resulting blackout could last anywhere from hours to months, depending on the amount of damage sustained.

Strong CMEs are classified as low-frequency/high-impact events, meaning that while they are rare, their consequences are far-reaching, researchers said.

A 2008 workshop by the National Research Council’s Space Studies Board predicted that a "severe geomagnetic storm scenario" would have societal and economic costs of up to $2 trillion in the first year alone, and recovery time ranging from four to 10 years.

The predictions from NASA's Solar Shield could potentially help avoid the worst of the damage, researchers said.

The project aims to minimize the effects by providing both short- and long-term predictions regarding impending CMEs. Today, scientists can tell when an ejection is headed towards Earth, but the data is very generalized. [Amazing Photos of Recent Sun Storms]

Different power nodes are affected by the resulting magnetic storms in different ways. Part of this depends on the time of day; systems are more vulnerable during non-peak usage hours.

Location also factors in. High latitude locations experience more dramatic impacts than their low latitude counterparts. Another factor is local geology; the resulting currents are affected by the ground conductivity.

So each node faces a different level of risk, which Solar Shield aims to calculate. But how do they do it?

It goes something like this: Once a coronal mass ejection is registered, data from the sun-watching observatories like the SOHO spacecraft and NASA's twin Stereo satellites allow the team to create a 3-D model and provide a relatively long-term prediction as to its arrival time, ranging anywhere from 24 to 48 hours.

While the CME travels through space, the team uses the computers at Goddard's Community Coordinated Modeling Center (CCMC) to create generalized predictions. As the stream of particles moves closer to Earth, it passes NASA's Advanced Composition Explorer – a space weather monitoring satellite – about 30 to 60 minutes before reaching our planet.

The ACE satellite collects real-time data, enabling the team to quickly refine and narrow their predictions. NASA then notifies the Electric Power Research Institute’s Sunburst program with their results.

"We quickly feed the data into CCMC computers," Pulkkinen explained in a statement. "Our models predict fields and currents in Earth's upper atmosphere and propagate these currents down to the ground."

Pulkkinen said the Solar Shield project is still in the experimental stage and more data – meaning more solar activity observations – will be needed to refine it. But he hopes that more individual power companies will be able to turn to the EPRI to receive both forecasts and real-time information for the approaching storm.

Each node could then take the action it deems appropriate, based on localized predictions, NASA, he added.

These actions could include simple things such as canceling planned maintenance work or having more employees on hand to deal with resulting surges, or stronger tactics like disconnecting the most vulnerable transformers from the grid itself. Such a controlled power outage only would be temporary, and far less damaging than an externally induced blackout.

However, a false alarm could be costly to the electric companies, so more real-life observations and partners among the power industry are need to refine the processes, Pulkkinen said.

"We'd like more power companies to join our research effort," he added. "The more data we can collect from the field, the faster we can test and improve Solar Shield."