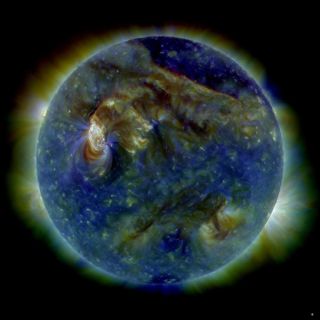 A vividnew photo of the sun has revealed a new view of a solar eruption in the star'snorthern hemisphere that blasted charged particles in Earth's direction thisweek, according to NASA officials.

Thesolar storm, which NASA called a "solar tsunami" in a Fridaystatement, occurred Aug. 1. It was a Class C3 solar flare in which almost the entire Earth-facing side of the sun erupted in awave of tumultuous activity. [New solar tsunami photo.]

Theflare is visible as the white area on the upper left, and the ensuing solartsunami is the wave-like structure in the upper right. Magnetic filaments canalso be seen coming off the surface of the sun.

Thedifferent colors in the image represent different temperatures of gas.

Theeruption, called a coronal mass ejection, was spotted by NASA's Solar Dynamics Observatory , which captures high-definition views of the sun ata variety of wavelengths. SDO was launched in February and peers deep into thelayers of the sun, investigating the mysteries of its inner workings.

Analystsbelieve a second solar flare could come on the heels of the first flare, andcould re-energize the fading geomagnetic storm and spark a new round of brightaurora displays.