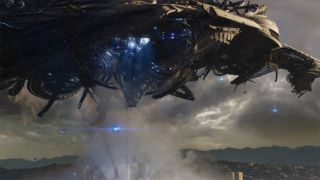 A scene from the new film Skyline, about an alien invasion in Los Angeles.
(Image: © Universal Pictures)

Aliens,typecast for years as Hollywood heavies, are back in the theaters,terrorizingthe populace, wrecking a lot of urban real estate, and ingestinghaplessbit-part actors.

In?Skyline,? a much-ballyhooed flick by the Strause brothers that openedNov. 12,a weird assortment of slimy extraterrestrials from an unspecified worldplummetinto downtown Los Angeles like spent roman candles, and start givinghumans ahard time. A lot of people probably figure that L.A. had it coming (asentimentironically echoed by one of the principals in the film), although inthetradition of ?War of the Worlds,? the aliensare an equal opportunity enemy, and extend their evil ways to cities inotherworthy countries.

Thestory revolves (albeit, slowly) around a small group of contentiouspeopleholed up in a penthouse apartment, kept indoors by nothing more thanthegradual destruction of humanity and all of its works. Not only are theyconfined to quarters like bad kids banished to their rooms, this motleycrew mustalso keep the blinds down. The invaders are outfitted with brightlights (analien hallmark since ?Close Encounters of the Third Kind?) ? and likethe sirensof old, their luminance can dazzle victims, luring them to destruction.Thesevisitors from afar are just like bulked-up, air-breathing lantern fish.

Thecharacters spend several days attempting to avoid death-by-alien,although they have neither the requisite skills nor even a helpful plotdevice.But you won?t care. Indeed, confronted by characters as wooden asPinocchio,it?s a toss-up whether the audience should root for the hominids or thetoad-skinned aliens.

Youmay not be surprised to hear that our military, bravely wieldingeverythingfrom rifles to stealth aircraft, doesn?t seem able to discourage theseunattractive guests. But they give it a credible shot, as it were. Inonegratifying scene, they revert to a tactic that was Earth?s trump cardin 1950ssci-fi films ? -an atomic bomb. Alas, when the fireball fades, thenuked aliensjust shake it off and come out madder than a hornet. It?s disheartening.

Backin the heyday of the Japanese creature feature, I sometimes felt sorryforTokyo, which seemed to endure monster lizards shambling through itsdowntowndistricts on a monthly basis. Bad for business. But Los Angeles hasbeen indisaster?s crosshairs longer, suffering giant mutant ants, killerearthquakes, tsunamis,and the unwanted attention of aliens from every sector of the galaxy.

Allthese extraterrestrial guests have endeavored to clear away the city,althoughyou might cut them some slack there, simply on aesthetic grounds. Mosthave alsotargeted the citizenry. But you have to ask, why? Sometimes the aliensjustwant the real estate, but in ?Skyline? that doesn?t seem to be thecase.

Regrettably,not much time is spent on this small matter of motivation ? just whathasinduced these tentacled life forms to schlep hundreds of light-years totrashthe ?hood (no one actually says where they?re from, but you can betthese megafaunadon?t come from oh, say, the moon).

Thisisn?t a trivial fault. Film critics have noted that the hero inscience-fictionis the idea. The characters are merely expositorsof some novel notion,some scientifically plausible fantasy.

Sowhat?s the idea here? The alienshaven?t come for the water, nor are they interested in preciousminerals or savingEarth from our environmental abuse. No, in ?Skyline,? it seems thealiens areafter our nervous systems ? our brains and spinal cords ? which theyneed tobetter themselves.

Takeour brains? Futurists occasionally speculate that humanity?s destiny isto eventuallyupload our minds and culture into sophisticatedcomputers. But these slimy visitors aren?t computers. They?rebiologicalbeings, obviously in possession of their own intelligence. So why wouldtheywant to suck up our brains? Especially southern California brains? In a2006ranking of the states by school achievement, California ranked 46 outof 50 ?near the bottom. These aliens would do better to attack Vermont.

Youcan, of course, ignore thissmall plaint, and just enjoy watchingearthlingsbattle a horde of critters that look as if they escaped from anoversized plateof frutas del mar. The visuals are darn impressive, after all. But inthe end,the fact that the packaging is better than the meat is disappointing.?Skyline?is too much like a video game in which you don?t have a joystick.

Maybethe film?s producers sensed this. Several times during the movie, thecharacters say ?I don?t believe it.? You?ll be nodding your head inagreement.