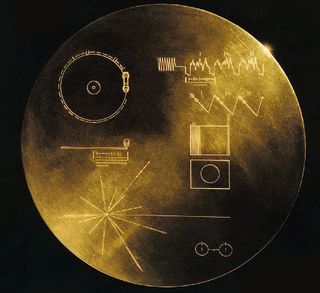 In 1977 NASA's Voyager 1 and 2 spacecraft launched into space carrying phonographs called the Golden Records containing pictures and sounds meant to show extraterrestrials a glimpse of life on Earth.
(Image: © NASA)

If mankind ever does receive a signal fromextraterrestrials, one of our first decisions may be what to write back.

As director of Interstellar Message Composition at the SETIInstitute, psychologist Douglas Vakoch has thought a lot about this question.

"The challenge of constructing any interstellarmessage is trying to anticipate what you and your recipient have incommon," Vakoch said. "One thing we can guarantee is they won't benative speakers of English or Swahili or Chinese."

And the same problem applies to any incoming message toEarth.

"It's very reasonable to think that we will know there's anextraterrestrial out there, that we will have a message that is distinctlyartificial, but that we won't be able to decipher it," Vakoch said.

So choosing a language and means to communicate is just asdifficult as figuring out what you want to say. A language based on mathematicsand scientific principles is a good idea, Vakoch said, because presumably ifaliens are advanced enough to send or receive a signal across the abyss ofspace, then they'll have some scientific understanding.

Humankind already has some experience sending messagescrafted for alien eyes. One of the most famous of these is the collection ofsounds and images contained on the VoyagerGolden Records, two phonograph records that were packed aboard the Voyager1 and 2 spacecraft before they were launched in 1977 on trajectories that haverecently taken them beyond the solar system.

"I think the richest description of ourselves that hasbeen sent into space is the Voyager interstellar records," Vakoch said."They include greetings in 55 languages, over a hundred picturesdescribing life on Earth."

The contents of the records were chosen by a committeechaired by the late Cornell University astronomer Carl Sagan. They containedrecordings of natural sounds such as thunder and bird calls, as well as musicfrom cultures around the world. But Vakoch said these messages were largelysymbolic, because most scientists admit the chances of another speciesintercepting these spacecraft are very slim since they have barely travelledbeyond the outskirts of the solar system so far in the 33 years they've been inspace.

However, even if our postcardsto aliens are never received, the act of crafting them may be a worthwhileexercise.

"Let's step aside from our daily concerns for a moment,and let's think about what we would want to say if our words are going to lasta thousand years," Vakoch said.

An interesting aspect of the records, he pointed out, isthat they emphasize the positive aspects of life on Earth, while ignoringbleaker realities such as war and environmental degradation.

"It really highlights our natural tendency in makingcontact in putting our best foot forward," he said. "It's the naturalway to meet strangers. You don't typically tell them about all your problems ona first date."

Though this is an understandable inclination, he said thatadvanced extraterrestrials may find it very intriguing to hear about theproblems that humans face on a day-to-day basis.

"We have a lot of problems as a species that we'restruggling with," Vakoch said. "We're not sure if we're even going tosurvive as a species on our planet. I think a more informative message would beactually to talk about some of the challenges we face because I think that?sone of the defining characteristics of our civilization."

In a recent project called "Earth Speaks," the SETI Institutesolicited public suggestions about what to say in a communication to aliens.

"One of the most common messages coming in to EarthSpeaks is the simple 'Help,'" Vakoch said.

Or perhaps people shouldn't bother composing a message atall. Another SETI scientist, astronomer Seth Shostak, has proposed that we justbroadcast everything on the Google servers out to aliens.

"Instead of trying to think of what's fundamental, justsend them a lot of data and let them sort through and find the pattern,"Vakoch said.

Vakoch discussed some of the issues around interstellarmessage composition in a recent paper in the journal Acta Astronautica.