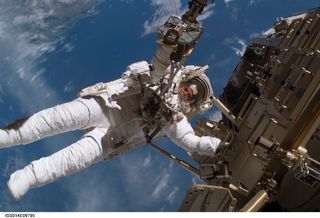 Astronauts need to wear protective gear to venture out into space. Not only do their lives depend on the spacesuit working properly, but they must limit their time in space because the suits don’t provide much radiation shielding.
(Image: © NASA)

The future of space exploration is evolving into a hybridof human and robotic expeditions, one which may change the shape of humanity inspace.

In Part 1 of this report, James Hughes, a medicalethicist at Trinity College in Hartford, Conn., argued that we are alreadyliving in the Age of the Cyborg, with medical advances such as LASIK eyesurgery blurring the line between natural and technologically-enhancedhumans.

Kevin Warwick of the Cybernetic Intelligence ResearchGroup at the University of Reading in England decided to brave this newfrontier for himself by surgically implanting a computer device into his arm totry to send electrical signals to his brain.

To Infinity and Beyond

Robots have been making great strides in the final frontier.From the MER rovers, now in their seventh year of exploring the surface ofMars, to the Huygens probe on Saturn's moon Titan, to the Voyager spacecrafttraveling to the farthest reaches of our solar system and, perhaps one day, thenearest stars, it seems that machines have us beat when it comes to exploringspace.

Robots can get their energy from nuclear batteries or solarpanels rather than food. They don't need sleep or water or oxygen, and thelong-term effect of radiation is not as destructive as it is for humans. Settingaside the example of HAL 9000 in Arthur C. Clarke's story 2001: A SpaceOdyssey, computers are more psychologically suited than humans to spendeternity alone in the cosmos.

NASA has several projects underway to develop better "human-machineinterfaces." The goal of this research is to improve communicationbetween people and computers, making the machines our "avatars" forspace exploration.

Hughes thinks there will come a day when this kind ofresearch will allow us to manipulate robots and other machines as easily andnaturally as we move our own body.

"I imagine that as soon as we have this kind of directcontrol over our various kinds of machines, our way of perceiving ourselveswill change, just like we currently see our cell phones and cars as extensionsof ourselves," says Hughes.

Perhaps a brain implant linking us to our robots would bethe next step in space exploration, greatly reducing communication time acrossthe vast expanse of space. For instance, depending on where Mars is in itsorbit, it takes between 3 to 30 minutes for a radio message sent from Earth toreach Mars, and then an equally long time for us to get the response. For moredistant destinations, the message relay would take even longer. But thoughtcommunication could be virtually instantaneous.

Warwick says that implanting computer chips in the brain toimprove communication is a fairly straight-forward development, much as thetelephone was the next step from the telegraph.

"The concept of a talking telegraph was consideredcrazy," says Warwick. "I think there's an element of that [whenpeople consider communicating via brain implants], instead of seeing thescientific potential."

One debate in the space community is whether humans orrobots should be sent to explore. While there are compelling arguments for bothsides, we must find a way to make extended human space travel feasible if wehope to survive when our Sun becomes a Red Giant star in about 5 billion years.When this happens, our planet and all life on it will be consumed. But perhapsby this point in the future, we may have become so merged with our machinesthat the "human versus robots" debate is moot.

In fact, that's the conclusion reached by scientistsinvolved in the search for extraterrestrial intelligence (SETI). Paul Davies, aSETI scientist at Arizona State University, says in his book The EerieSilence that any aliens exploring the universe will be machine hybrids. Notonly are machines better able to endure extended exposure to the conditions ofspace, but they have the potential to develop intelligence far beyond thecapacity of the human brain.

"I think it very likely ? in fact inevitable ? thatbiological intelligence is only a transitory phenomenon, a fleeting phase inthe evolution of the universe," Davies writes. "If we ever encounterextraterrestrial intelligence, I believe it is overwhelmingly likely to bepost-biological in nature."

Hughes completely agrees that space travelers will likely bemechanical rather than organic. "If you're looking out 200 years into thefuture of the colonization of space, humans are probably not going to be afactor," he says.

Those who do not wish to become cyborgs (and who do notembrace our cyborg overlords) may become depressed by such conclusions.

One of the biggest concerns about our future as cyborgscomes out of our experience with computers. If all our brains are connected,what happens if a computer virus is introduced? How will we be able to maintainour privacy if a hacker can plug into our brain? Will there even be such athing as an individual identity, or will we become like ants in a colony orbees in a hive?

Human-cyborg insect colonies may seem like science fiction,but cyborg insects are now being developed by the U.S. military's Defense AdvancedResearch Projects Agency (DARPA). Their "HI-MEMS" project inserts acomputer chip into an insect pupae, and the chip becomes connected to the bodyas the insect develops.

"Since a majority of the tissue development in insectsoccurs in the later stages of metamorphosis, the renewed tissue growth aroundthe MEMS will tend to heal, and form a reliable and stable tissue-machineinterface," says the HI-MEMS website.

According to the HI-MEMS website, "The intimate controlof insects with embedded microsystems will enable insect cyborgs, which couldcarry one or more sensors, such as a microphone or a gas sensor, to relay backinformation gathered from the target destination."

While the program has created cyborgbeetles and moths so far, it's not yet ready to releaseswarms of insect spies. DARPA also has funded research to develop cyborgsharks, where smells and electrical signals are used to steer the sharks indesired directions. Other experiments by various researchers to merge animalsand machines have used pigeons, cats, and rats. Such experiments are staples ofscience fiction, from the cyborg dolphin in William Gibson's Johnny Mnemonicto the housefly monitors in Philip K. Dick's Lies, Inc.

For every dystopian tale of the potential evils of science,there are just as many hopes of how science could free us from a long list ofmedical maladies. The future of cyborg science likely will be a complicated mixof both good and bad outcomes. Warwick says that scientists, who are driven toinvestigate for the sheer joy of discovery, don't spend too much time worryingabout the practical results of their research.

"I think it's important to be aware and to try todiscuss the positive and negativesides," says Warwick. "But to be honest, you never know. With theRFID implant that I had, which was a relatively trivial thing, I found out thata nightclub in Barcelona uses it as a fashion item to attract people to come tothe nightclub. You don't have to pay for your drinks; it's all charged to yourimplant. So there's always going to be something around the corner that you'djust never imagined."