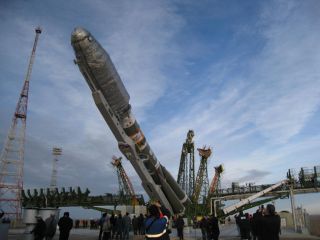 A Soyuz 2 rocket is raised into position at Baikonur Cosmodrome ahead of the planned Oct. 19, 2010 launch of six new Globalstar mobile communications satellites. The vehicle was rolled out from its integration building to Launch Pad #6 on a transporter/erector rail car.
(Image: © Arianespace)

Thelaunch is the first phase of a $1 billioninvestment to restore Globalstar's beleaguered two-way voice and dataserviceand extend satellite operations beyond 2025.

Globalstar'sduplex voice and data servicefell victim to a problem with the existing fleet's S-band antennas.Firstannounced in 2007, the issue severely limits reliable satellitecoverage forusers on the ground.

"Therewill be an immediate improvementafter each of the launches," said Tony Navarra, president of globaloperations at Globalstar Inc. "A month or two after this first launch,they will start to see improved services."

TheSoyuz rocket is scheduled to launch at1710:59 GMT (1:10:59 p.m. EDT) Tuesday from the Baikonur Cosmodrome inKazakhstan. The booster is flying in the Soyuz 2-1a configuration withanadvanced digital command and telemetry system and upgraded injectors inthefirst and second stage engines.

"It'smoving according toschedule," Navarra said Monday in a phone interview from Baikonur."The Soyuz rocket is on the pad now."

TheSoyuz will ascend above Baikonur and turneast, surpassing the speed of sound moments after liftoff and consumingall ofits first stage propellant two minutes into the mission.

Aftershedding a bulbous ST-type payloadfairing, the third stage engine will shut down and release the Fregatupperstage. The Fregat main engine will ignite to place itself in a lowparkingorbit, then fire a second time to reach the Globalstar separation orbitat analtitude of 572 miles and an inclination of 52 degrees.

Therocket will release the other fourpayloads less than two minutes later, completing the mission at T+plus100 minutes,20 seconds. The Fregat will later fire a third time to guide itself toadestructive re-entry over the Pacific Ocean.

Navarrasaid two of the satellites launchedTuesday will enter the constellation in about one month. It will beearly 2011when the other four spacecraft drift to their assigned locations.

"Iwould say in the second quarter of2011 Globalstar will be back and providing the high-quality voice anddataservice that we had in the 2004 to 2006 timeframe," Navarra said.

Builtby Thales Alenia Space, each newGlobalstar satellite is trapezoidal in shape and features 16transponders inC-band and S-band and 16 recievers in L-band and C-band. Thesecond-generationcraft are designed to work for 15 years, twice the design specificationof theexisting satellites, most of which have exceeded their plannedlifetimes.

Accordingto Navarra, there are about 40satellites left in Globalstar's space fleet. Officials are retiring theremaining satellites as new ones arrive in orbit.

Theeight payloads launched in 2007 will jointhe 24 brand new spacecraft in the next incarnation of the Globalstarconstellation.

"We'regoing to marry the 24 satelliteswith the eight already in orbit to have a 32-satellite constellation,"Navarra said.