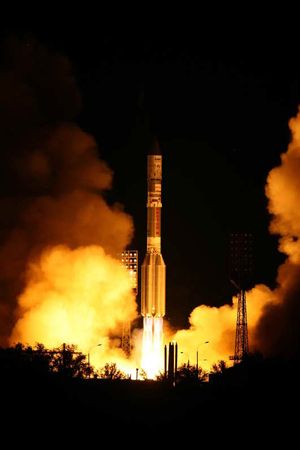 SiriusXM Radio'snext broadcasting satellite rocketed away from Earth and into spaceThursday,reaching a lofty perch high above Earth for a 15-year mission servingnearly 20million subscribers in North America with music, news and varietyprogramming.

Thursday'slaunch was the ninthProton flightof the year.It was the sixth mission for International Launch Services.

SiriusXM 5 will firean on-board kick engine several times over the next few weeks to reachan orbit22,300 miles above the equator. Controllers will park the satellite at80 degreeswest longitude for a month of in-orbit testing, then the craft willdrift toits long-term home at 85.2 degrees west longitude.

SiriusXM 5 will join a fleet of spacecraftalready beaming radio signals to receivers in cars, trucks, boats,aircraft,homes and mobile devices of more than 19.8 million subscribers.

"Thesuccessful launch of XM 5 bolstersour continuity of services and will help ensure Sirius XM Radio's audioanddata services are reliably delivered to our customers," said DavidFrear,executive vice president and chief financial officer of Sirius XMRadio."We knew we could count on ILS and Khrunichev to launch on-time andwithflawless precision as they have been demonstrating for us for over adecadenow."

Thesatellite is designed to last for atleast 15 years in space. Based on Loral's 1300 spacecraft bus, SiriusXM 5 willproduce nearly 20 kilowatts of power at the end of its mission.

"Therelationship we have with Sirius XMRadio dates back to over 10 years with the launch of the Siriusconstellationof three satellites in 2000," said Frank McKenna, president of ILS."The entire team of ILS, Khrunichev, Sirius XM and Space Systems/Loralonce again worked throughout the mission to deliver the XM 5 satellitetoorbit. We thank Sirius XM for entrusting ILS Proton with their businessandallowing us to participate in the making of satellite radio history."