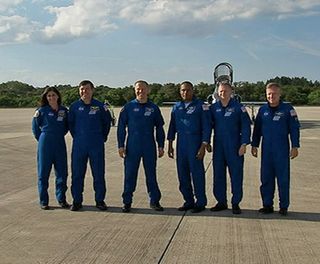 In preparation for liftoff of space shuttle Discovery on the STS-133 mission, the six-member crew flew to NASA's Kennedy Space Center in Florida to conduct the prelaunch training and countdown dress rehearsal, officially known as the Terminal Countdown Demonstration Test.
(Image: © NASA TV)

The six-astronaut crew of space shuttle Discovery's finalmission arrived at NASA's Florida spaceport yesterday (Oct. 12) for severaldays of training, including a complete dress rehearsal for their upcominglaunch.

The astronauts will spend the next few days at NASA's KennedySpace Center in Cape Canaveral to prepare for the lastlaunch of Discovery on Nov. 1.

"It's really exciting to be down here, we haven't doneone of these in nearly six months," said Discovery commander SteveLindsey. "It's good to be back here with the Kennedy Space Center team andget an opportunity to work with them again. Our training is pretty much done,for the most part. We're ready to fly. Just a few more weeks of things for usto do and we'll be ready to go."

Over the course this week, the crewmembers will delve intoin-depth training sessions, meet with news media, and then conduct a full launchday run-through aboard the space shuttle on Friday morning (Oct. 15). Thepractice launch is called the Terminal Countdown Demonstration Test, or TCDT. [Photos:Discovery's Launch Pad Trip]

The crew is slated to launch on an 11-day mission to the InternationalSpace Station. On its final spaceflight, spaceshuttle Discovery will take important spare parts to the space station,including a storage room and a humanoid robot helper to assist the crew of theorbiting outpost.

NASA will retire the three remaining shuttles in its fleet ?Discovery, Atlantis and Endeavour ? next year to make way for a new plan aimedat sending astronauts to visit an asteroid and Mars. Discovery is the oldest ofNASA's space shuttles.

On Monday (Oct. 11), President Barack Obama signed a majorNASA act that turns his vision for U.S. space exploration into law. The NASAauthorization act scraps the space agency's previous moon-oriented goal andpaves the way for a manned mission to an asteroid by 2025. A manned mission toMars is envisioned for some time in the 2030s.

The bill also calls for a budget of $19 billion for NASA in2011, adding one extra space shuttle flight before the fleet retires next year,and the extension of the International Space Station through at least 2020.