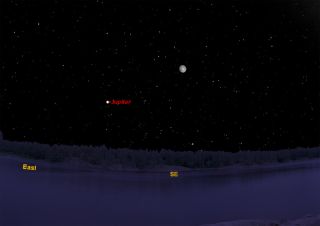 This sky map shows the location of the planet Jupiter in the sky as seen from the U.S. eastern coast on Monday, Sept. 20 at 9 pm ET.
(Image: © Starry Night Software [Full Story])

Stargazers can get a great look at Jupiter on any clear night for the rest of September. The giant planet, always bright, will be especially hard to miss as it approaches closer to Earth than it will at any time until 2022.

In North America this month, Jupiter will be low in the east shortly after twilight, moving higher up toward the southeast as the evening grows late, according to NASA and Sky and Telescope magazine.

Earth orbits the sun in about 365 days. But Jupiter, farther out there, takes 4,332 Earth-days to make the same trip. Therefore, Earth laps Jupiter periodically, on the inside track. As that pass occurs, the two worlds come much closer than when they are on opposite sides of the sun. Because the planets' orbits are not perfect circles, some passes are tighter than others.

This Jupiter sky map shows where to look to see the bright planet on the night of Sept. 20.

This year's close pass should beat out other years to give a spectacular show, with Jupiter coming nearer to Earth than at any time between 1963 and 2022, according to a Sky & Telescope announcement. At the closest point of its previous swing-by in August 2009, for example, Jupiter was more than 7 million miles (11.3 million km) farther away. That translated into the planet appearing 8 percent dimmer, all things considered.

Jupiter is also an extra 4 percent brighter than usual because one of its brown cloud belts has gone missing.

For nearly a year, the giant planet's South Equatorial Belt, usually easy to see in a small telescope, has been hidden under a layer of bright white ammonia clouds. This lets more sunlight reflect off the planet, giving it an overall brightness boost.

There's more to see in the heavens right now than just Jupiter. The giant planet is lined up almost perfectly with Uranus at the moment.

Uranus is five times farther away and almost 3,000 times dimmer than Jupiter, so it's invisible to the unaided eye. But binoculars or a telescope — as well as access to a detailed chart — will show Uranus less than 1 degree from Jupiter now through Sept. 24, Sky and Telescope said. (A fist held at arm's length covers about 10 degrees of the sky.)

On the other end of the brightness scale, the full moon joins this celestial scene around the same time, shining above Jupiter on the evening of Sept. 22 and to the left of it on Sept. 23.

Also, this week is one of the few occasions when stargazers will be able to get a good look at Mercury. Though Mercury is very bright, its orbit's extreme closeness to the sun dictates that the sun's glare usually overpowers the small, rocky planet.

But twice each year, once in the evening and once in the morning, Mercury stands highest in the sky, giving skywatchers the best opportunity to spot it. This week offers its best morning appearance of the year.

To see Mercury, skywatchers should go out any morning this week about 30 minutes before sunrise. A low, cloudless sky and an unobstructed view of the eastern horizon are necessary. Mercury should be visible just above where the sun will rise, about 10 degrees above the horizon.

Stargazers may need binoculars or a small telescope to see Mercury at first, but once spotted it should be visible to the unaided eye.