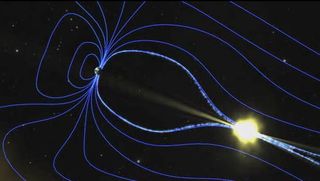 A spacequake in action is seen in this still from an animation of the interaction with Earth's magnetic field.
(Image: © Walt Feimer of Goddard's Scientific Visualization Lab. Full Story.)

Like an earthquake in space, so-called spacequakes are temblorsin Earth's magnetic field caused by plasma flying off the sun that could helpgenerate the colorful auroras that dance high in Earth's atmosphere, a newstudy suggests.

While felt most strongly in Earth orbit, these quakes canalso reach all the way down to the surface of Earth itself.

"Magnetic reverberations have been detected at groundstations all around the globe, much like seismic detectors measure a largeearthquake," said Vassilis Angelopoulos of UCLA, principle investigator ofNASA's THEMISspacecraft.

And these rumbles can pack a punch.

"The total energy in a spacequake can rival that of amagnitude 5 or 6 earthquake," according to Evgeny Panov of the SpaceResearch Institute in Austria. Panov is first author of a paper reporting theresults of a study on spacequakes in the April 2010 issue of Geophysical Research Letters. [Illustration: Spacequake in action.]

Spacequakes aren't the only unearthly temblors around.Scientists have also discovered starquakes(violent trembling inside stars), moonquakesand asteroid quakes (seismic tremors on the surface of the moon and asteroids,respectively). In fact, Earth can actually stimulate asteroidquakeswhen wayward space rocks fly too close to our planet.

In 2007, THEMIS discovered the precursors of spacequakes.The action begins in Earth's magnetic tail, which is stretched out like awindsock by the million-miles-per-hour solar wind. Sometimes the tail canbecome so stretched and tension-filled, it snaps back like an over-torquedrubber band.

Solar wind plasma trapped in the tail hurtles toward Earth.On more than one occasion, the five THEMIS spacecraft were in the line of firewhen these "plasma jets" swept by. Clearly, the jets were going tohit Earth. But what would happen then? The fleet moved closer to the planet tofind out.

According to THEMIS, the jets crash into the geomagneticfield some 18,600 miles (30,000 km) above Earth's equator. The impact sets offa rebounding process, in which the incoming plasma actually bounces up and downon the reverberating magnetic field, akin to a tennis ball bouncing up and downon a carpeted floor. The first bounce is a big one, followed by bounces ofdecreasing amplitude as energy is dissipated in the carpet.

"We've long suspected that something like this was happening,"Sibeck said. "By observing the process in situ, however, THEMIS hasdiscovered something new and surprising."

The surprise is plasma vortices, huge whirls of magnetizedgas as wide as Earth itself, spinning on the verge of the quaking magnetic field.

The tails of these vortices are thought to funnel particlesinto Earth's atmosphere, sparking colorful auroras that dance over the sky.