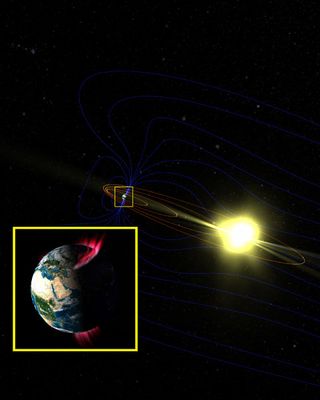 A flotillaof NASA probes has solved the 30-year mystery behind the most colorful auroradisplays on Earth and the explosive magnetic "substorms" that spawnthem.

NASA?s fiveTHEMIS spacecraft in different orbits around Earth spotted the trigger for the substorms,powerful energy bursts in the planet?s magnetic field that can interfere withsatellites, power grids and superchargethe aurora borealis, also known as the northern lights.

Angelopoulos and his teamused the THEMISprobes to monitor the energy levels in Earth?s magnetic field. In Februaryof this year, the spacecraft spotted substorms originating in the tail of themagnetosphere that streams out away from the sun. As energy levels in themagnetic field lines built up, they drew ever closer to one another until theyreconnected, setting off a storm, researchers said.

For the last three decades,researchers were undecided on whether the substorms stemmed from magnetic fieldlines reconnecting, or originated much closer to Earth where they were triggeredby explosive instability.

"Our data show clearlyand for the first time that magnetic reconnection is the trigger," saidAngelopoulos.

The research is detailed inthe July 24 online edition of the journal Science.

Firstdiscovered in the 19th century, magnetic substorms are recurring energy burstsstemming from the release of charged particles — collected from the sun?s solarwind — in the Earth?s magnetic field. The high-energy particles zoom down theEarth?s magnetic field lines until they collide with the planet?s upperatmosphere to create dazzling,shifting colors in the aurora borealis.

Researchers hope that by betterunderstanding the storms, they will be able to prepare for or predict majorspace weather events before the cosmic tempests interfere with communicationsor endanger astronautsin Earth orbit.

"We need to understandthis environment and eventually be able to predict when these large energyreleases will happen so astronauts can go inside their spacecraft and we canturn off critical systems on satellites so they will not be damaged,"Angelopoulos said, adding that previous missions could only track bursts at asingle point and time. ?To resolve this question properly requires correlationsand signal-timing at multiple locations. This is precisely what was missinguntil now."

NASA?s$200 million THEMIS spacecraft, short for Time History of Events andMacroscale Interactions During Substorms, launched in February 2007 on atwo-year mission to hunt for the substorm source. The five dishwasher-sizedspacecraft are arranged in different orbits between the Earth and moon, and areworking in conjunction with 20 ground-based observatories across the northern UnitedStates and Canada to monitor substorm activity.