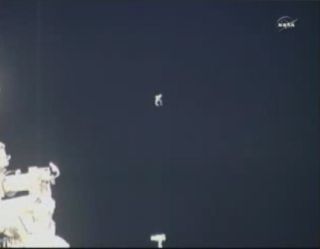 At one point - around 1:45 a.m. EDT (0645 GMT) ? the spacewalkersaccidentally lost an unidentified object that was visible spinning slowly as itfloated farther and farther away from their perch on the side of the spacestation. [Photoof the lost tool floating away]

"What is it?" one cosmonaut asked in Russian.

The spacewalkers were en route to a work site on the station'sZvezda module, carrying reels of cables they planned to wire up to thestation's Rassvet (Russian for "Dawn") research room. The cosmonautsspeculated that the lost item was a tool to secure the cables in place oncethey are installed. If so, the loss isn't serious.

"All right, very good, we're probably going to be usingwire anyway to attach," a spacewalker said.

About an hour later, another unidentified item accidentallyfloated off into space. This small object appeared to be a washer.

The lost tools will temporarily become new pieces of spacejunk floating in Earth orbit, and should eventually be destroyed as theyburn up in Earth's atmosphere.

The space around Earth is littered with thousands of piecesof space debris left over from old rockets, dead satellites and lost tools (aswell as intentionally discarded items) that escaped the grip of astronautsworking on spacewalks. In fact, later in the spacewalk Yurchikhin and Kornienkointentionally tossed an old, broken video camera overboard later to discard itafter they removed it from the station's Russian segment.

In 2008, a spacewalker losta space tool bag worth $100,000 when it drifted away after popping free.The tool bag later re-entered the Earth's atmosphere in August 2009 and burnedup. In 2007, another spacewalker threw a huge coolant tank overboard on purposeto discard it because it was no longer needed and too large to be returned toEarth.

The U.S. Defense Department's Space Surveillance Networktracks much of the space debris in orbit today an alerts NASA of any potentialrisks to the InternationalSpace Station and its crew. NASA and its space station partners routinelymove the International Space Station when the threat of impact posed by anearby object is too high.

The first item lost in space Tuesday, at least, shouldn'tpose a risk to the station, NASA commentator Brandi Dean said.

Other than the mislaid items, the spacewalk went smoothly,and Yurchikhin and Kornienko were able to accomplish all their goals. Thespacewalk began at 12:11 a.m. EDT (0411 GMT).

First, the spacewalkers removed a broken camera used toguide in unmanned cargo ships called Automated Transfer Vehicles (ATVs) dockingat the station. After this job, they moved on to the Rassvet module, which wasdelivered to the station in May by the visiting space shuttle Atlantis. Thecosmonauts routed a set of cables to connect the command and data handlingcomputers to the module, and also enabled the room's Kurs docking system, whichallows arriving ships to automatically dock at Rassvet's docking port.