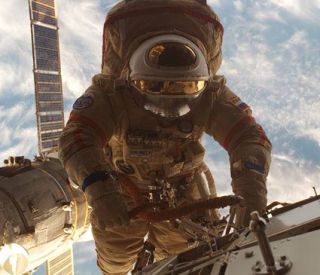 Outfitted in a Russian Orlan space suit, cosmonaut Fyodor Yurchikhin participates in a spacewalk during Expedition 15 in June 2007.
(Image: © NASA)

Two Russian cosmonauts have floated outside the InternationalSpace Station to begin a spacewalk aimed at changing out a broken camera andwiring up a new room so spaceships can park there on autopilot.

The spaceflyers ? flight engineers Fyodor Yurchikhin andMikhail Kornienko of the station's Expedition 24 mission ? plan to be outsidefor about six hours. Their spacewalk began about half an hour late, officiallystarting on Tuesday at 12:11 a.m. EDT (0411 GMT).

While the Russian-led spacewalk is taking place, thecosmonauts' four crewmates ? three Americans and one Russian ? will work onscience and maintenance activities inside the InternationalSpace Station.

Yurchikhin, a spaceflight veteran, will be making his fourthspacewalk, while Kornienko will be spacewalking for the first time.

The first task for the two spacewalkers, after exiting thestation's Pirs docking compartment airlock, will be to remove a brokencamera.

"The crew is going to replace a degraded video cameraat the aft end of the Zvezda module and replace it with a new one that wasrecently delivered to the station," NASA's Expedition 24 spacewalk flightdirector Chris Edelen said during a briefing last week. "The video cameracurrently on orbit has numerous bad pixels resulting in degraded picturequality."

The camera is used to track incoming European AutomatedTransfer Vehicles (ATVs) ? unmanned cargo ships that ferry supplies to thestation ? as they approach and dock at the Zvezda module.

Yurchikhin and Kornienko will use a ratchet to remove theold camera, then install its replacement. At the end of the spacewalk thecosmonauts will jettison the broken hardware into space, where it should slowlyloose altitude and, after about 120 days, re-enter Earth's atmosphere and burnup.

The decision to add a new piece of spacejunk to orbit isn't made lightly, but in this case mission managers decidedit was necessary.

"In this case with the ATV camera, it does present ahazard to the crew due to the insulation surrounding the camera," Edelensaid. "The concern is that that insulation could flake loose inside thecabin [if brought back inside], resulting in fibers that the crew could breathein. So once that determination was made then it was clear that jettisoning wasthe right thing to do."

After the camera work, Yurchikhin and Kornienko willtransfer over to the station's new Rassvetresearch module. The $200 million room was delivered to the station in Mayby the visiting space shuttle Atlantis.

The spacewalkers will connect a series of cables to link themodule with Russian Command and Data Handling computers. Another set of cordswill connect Rassvet with the station's Kurs automated docking system to allowincoming vehicles to automatically connect with Rassvet's docking port.

The job will enable Rassvet to serve as a fourthfully-functioning docking port on the InternationalSpace Station. The new port will be used for arriving Russianvehicles.

The next spacewalk planned for the station crew is an Americanexcursion scheduled for Aug. 5. Expedition 24 flight Engineers Tracy CaldwellDyson and Doug Wheelock will conduct that trip.