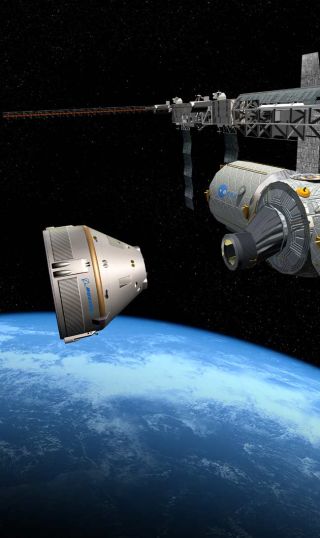 The new Boeingspace capsule is a project using the company's recent $18 million award fromNASA to advance the concepts and technology necessary to build a commercialcrew space transportation system. It is one of several efforts by differentU.S. companies to come with new spaceships to fill the void left by NASA'sretiring shuttles.

"We'reright on schedule for all of our demonstrations," Reiley told SPACE.com."We've done 50 to 60 percent of our milestones, and all of them have beenon time or ahead of time."

At the heartof Boeing's new spaceship design is the CST-100 capsule, which will looksimilar to the cone-shaped Apollo and Orion spacecraft.

The Apollocapsules were built to ferry astronauts between Earth and lunar orbit in thelate 1960s and 1970s. The larger Orion vehicles were part of NASA'sConstellation program to return astronauts to the moon, and are now slated toserve as a spacestation lifeboat.

"It's alittle smaller than Orion, but a little bigger than Apollo," Reiley saidof the CST-100 spacecraft. "It carries seven, but it's fairly small ? it'snot as large or as spacious as the Orion."

The capsuleis being built for short missions to the space station, meaning it will not bedesigned to stay in space for long periods of time.

Boeing plansto launch the CST-100 capsule from Florida, but has yet to determine which rocketwill carry it into space.

Thespacecraft is being designed for compatibility with a variety of rockets, inmuch the same way that commercial satellites are. This will give Boeing theflexibility to select an appropriate rocket later in the development process.

And whileNASA has outlined a launch target for 2016, the new capsule could be rolled outsooner than expected, which could help fill the gap in future human spaceflightshould NASA scrap its Constellation program.

"Wehaven't laid out our exact timeline yet, but we do have a schedule, and itbeats the 2016 that was NASA's goal," Reiley said.

NASA isn'tthe only customer Boeing has in mind for the CST-100. The company has teamed upwith Bigelow Aerospace, a Las Vegas-based company that recently joined the CommercialSpaceflight Federation.

BigelowAerospace is developing private inflatablespace habitats with the goal of launching a commercial space station in2014. The company has already launched two prototype modules into space.

For the newCST-100 spacecraft, Bigelow Aerospace will assist with demonstrations anddesign work in areas where they have cultivated experience from the design andconstruction of their orbital facilities and commercial space complex, saidReiley. The partnership also represents an important stepping stone for thecommercial spaceflight industry.

"Thefuture is being created now," said Bigelow Aerospace founder and presidentRobert Bigelow in a statement. "Commercial crew transportation has thepotential to revolutionize the space industry for public and private sectorentities alike."

Bigelow, whoowns the Budget Suites of America hotel chain, also sees the vast potential forsynergistic collaboration between his company and the veteran Boeing, which hasbeen developing human and robotic space vehicles and their accompanyinghardware for over 50 years.?

"Boeing'sunparalleled heritage and experience, combined with Bigelow Aerospace'sentrepreneurial spirit and desire to keep costs low, represents the best ofboth established and new space companies," Bigelow said. "The productof this relationship, the CST-100 capsule, will represent the safest, mostreliable, and most cost-effective spacecraft ever to fly."

For Boeing,one of their main challenges in expanding their branch of commercialspaceflight is in designing a relatively inexpensive option.

"Ithink one of the big challenges for Boeing, in particular, is to try to dothings quicker and less expensive," Reiley said. "We learned a lot fromBigelow on how to do that."

Both Reileyand Bigelow agree that the inaugural launch of the private Falcon 9 rocket andDragon capsule by the California-based company SpaceX represented a greatstride made in commercial spaceflight. ?[Photosof the historic Falcon 9 launch]

"Theunprecedented success of the Falcon 9's inaugural launch clearly demonstratesthat it's possible to dramatically reduce the cost of human spaceflightoperations," Bigelow said. "SpaceX's Falcon 9 rocket and Dragoncapsule were developed at a cost dramatically below that of traditionalcost-plus programs ? this should be a wakeup call that it's time for a new wayof doing business."

And, withmonths and years of demonstrations and tests on the horizon for Boeing, thecompany can look to the successful launch of Falcon 9 as inspiration andmotivation.