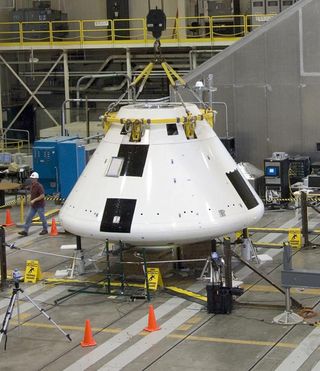 WASHINGTON ? Boeing is willing to build a crew capsule forNASA on a commercial fixed-price basis but is troubled by the agency?s plans tocontinue funding development of the Orion Crew Exploration Vehicle to serve asa space station lifeboat, according to a Boeing executive.

"With the recent announcement of a crewrescue vehicle as part of Orion, we do now recognize that we would have acost-plus, government-funded capsule competing against a commerciallyfixed-price capsule," Jayne Schnaars, Boeing?s vice president of business developmentfor space exploration, said during a presentation at the Women in Aerospaceconference here May 18. "So we?re working with NASA to say, 'We want thisbusiness, we know we can do it, help us.'"

After announcing in February that Orionand the rest of the Constellation program would be canceled in favor ofoutsourcing routine crew transportation to commercial operators, the WhiteHouse decided in April to have NASA fund completion of a stripped-down Orioncapsule that would launch to the international space station unmanned toserve as an escape craft.

Lockheed Martin, which beat Boeing and its teammate NorthropGrumman in 2006 for an Orion prime contract worth an initial $3.9 billion,welcomed the news as a partial reprieve for the project. But to Boeing,continued NASA funding of an Orion capsule that would need only a launch abort systemto start launching crews would add substantial risk to a business case Schnaarssaid will be a struggle to close.

"No matter how many folks say, 'I can build this, I canlaunch it, it?s going to work,' we have to make sure it makes business sense, andright now there?s significant challenges there," she said.