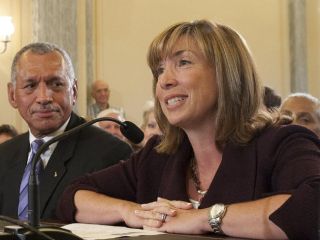 Anyone can register to submit questions to Space News here: http://tiny.cc/SNWebcast.

Questions can be sent in advance via e-mail at that link, orduring the broadcast through instant messaging, though space is limited, soearly registration is recommended.

"Folks can feel free to suggest tough ones,"Berger said. "I'm not going to say who the questions are from."

The main topic under discussion will be the newproposal for NASA put forward by President Barack Obama. The plan calls forthe space agency to abandon the existing Constellation program to return to themoon, and instead focus on building the technologies necessary to travel to anearby asteroid and Mars.

The proposal has encountered some resistance from lawmakers,and even space veterans such as NeilArmstrong.

"I hope to get [Garver] talking about some of thepolitical opposition NASA's new planhas encountered and more importantly what NASA intends to do to turn thesituation around," Berger said.

The webcast, which can be viewed at Space News' website (http://spacenews.com)will begin at 2:30 p.m. EDT.

"Overall, I think the webcast will be a good chance forLori to interact with the space community and provide some straight talk aboutsome tough issues," Berger said.

The broadcast is sponsored by Northrop Grumman.