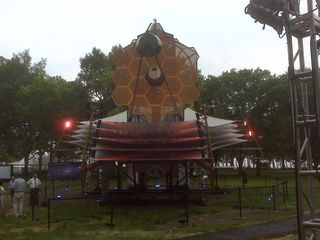 A full-scale, tennis court-sized model of the James Webb Space Telescope. The replica was on display in Battery Park in New York City as part of the 2010 World Science Festival.
(Image: © Denise Chow)

NEW YORK - With a full-scale model of the James Webb Space Telescope in the backdrop, amateur astronomers equipped with personal telescopes gathered last Saturday in New York City's Battery Park for a public evening of stargazing as part of the 2010 World Science Festival.

The contrast between the giant, tennis court-sized replica of the Webb telescope and the amateur scopes that had been set up on the grass was a poignant reminder of the strong and evolving partnership between the professional and amateur astronomical communities.

"For most things, if you put the word 'amateur' in front of it, it would make it a lesser thing," said Neil deGrasse Tyson, an astrophysicist and the director of the Hayden Planetarium at New York's American Museum of Natural History. "You wouldn't feel comfortable going to see an amateur brain surgeon or an amateur lawyer. But to call yourself an amateur astronomer, that's a badge of honor."

That pride was evident at the World Science Festival event ? titled "From the City to the Stars: Star-gazing with the Webb Telescope" ? part of a week-long schedule of science-related festivities.

"There are so many opportunities for amateurs to get involved now that would not normally be available," Tony Hoffman, a member of the Amateur Astronomers Association of New York, told SPACE.com. "It's incredible the possibilities that are open to amateurs because of the way that telescopes have evolved in the last couple of decades."

In an outdoor panel discussion that was held prior to the star-gazing event, planetary astronomer Heidi Hammel of the Space Science Institute in Boulder, Colo., reflected on the impact that technological advancements have had on the world of amateur astronomy.

"There have always been backyard observers," Hammel said. "It's true now, though, that there is so much more equipment that can be bought off the shelf."

Hoffman's own telescope, which he described as "very good for its size," cost approximately $1,000.

These improvements to the power and resolution of telescopes enable amateur astronomers to see farther and clearer into the cosmos, equipping them with the tools necessary to make discoveries and track big events. ?

In particular, advancements in technology, the widespread availability of telescopes, and the incredible and ubiquitous nature of the Internet have all contributed to bolstering the community of amateur astronomers, said John Mather, a Nobel laureate and the Webb telescope's senior project scientist.

Hammel agreed that the Internet has revolutionized the way in which astronomical discoveries can be reported and confirmed.

"The Internet has made communication far more rapid," Hammel said. "If there is a discovery, instantly around the world, anyone can confirm it."

In fact, this stargazing event came on the heels of one such discovery.

A collision on Jupiter was spotted last Friday by amateur astronomers Anthony Wesley in Australia and Christopher Go in the Philippines.

Wesley posted photos and a video on his website of the blazing fireball that slammed into the gas giant. Scientists, including Hammel, are now examining the site of the impact in hopes of identifying the mystery object that caused the collision.

It was Wesley, too, who first spotted a much larger crash on Jupiter that occurred in July 2009. His initial surveillance kicked off an international observation campaign, which included analysis by NASA's Hubble Space Telescope, to study the impact site.

Hammel was the lead researcher of a study that was recently published in The Astrophysical Journal Letters, which determined that a rogue asteroid about 1,600 feet (500 meters) across was the culprit in the spectacular July 2009 crash.

She noted that the collisions on Jupiter highlight the important and increasingly cohesive partnership between amateur and professional astronomers.

"We don't use Hubble to stare at Jupiter unless there's a special event or some special reason," Hammel said. "These collisions were found because amateurs were just looking at Jupiter. It's wonderful synergy between the amateur community and the professional community."

With the Webb telescope set to succeed the aging Hubble Space Telescope, the working relationship between professionals and amateurs will likely continue to flourish as the new, massive space observatory uses its infrared eyes to peer deep into the distant reaches of the universe.

"No single thing has engendered as much public interest as the Hubble Space Telescope," said Bruce Kamiat, who is also a member of the Amateur Astronomers Association of New York. "It has become a big part of our culture."

For Hoffman, it is the promise of what the Webb telescope could possibly discover that most excites him.

As members of the public weaved their way between the telescopes in Battery Park, some children stopped to look through Hoffman's telescope. Among these children, who knows which will grow up to proudly wear the badge of amateur astronomer?