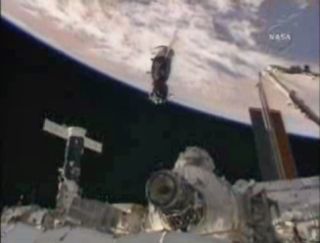 Astronauts on the International Space Station moved a Soyuzspaceship to a different parking post Wednesday to make room for a brand-newRussian research module to be delivered next week on NASA's shuttle Atlantis.

Russian-built Soyuz TMA-17 spacecraft undocked from anEarth-facing port the space station at 9:26 a.m. EDT (1326 GMT) and linked upto an empty parking spot at the rear of the space station just 17 minuteslater. Three of the station's six crewmembers rode aboard the Soyuz during thebrief space hop.

While the Soyuz parking spot swap seems short, the task wasabsolutely vital to prepare the space station for the arrival of NASA's spaceshuttle Atlantis next week.

"It is a prerequisite, or a requirement, for theflight," Atlantis' payload manager Robbie Ashley told reporters Tuesday.

Atlantis is set to launch Friday from Florida at 2:20 p.m. EDT(1820 GMT) and arrive at the station Sunday to deliver Russia's new sciencemodule Rassvet (which means "Dawn" in Russian). The mission isexpected to NASA's 132nd shuttle mission and finalflight of Atlantis.

Before today's Soyuz move, the Soyuz TMA-17 spacecraft wasdocked to Rassvet's destination on the station. So its move had to go smoothlyto allow Atlantis's upcoming mission.

Atlantis is poised to launch toward the space station onFriday at 2:20 p.m. EDT (1820 GMT) from NASA's Kennedy Space Station inFlorida. In addition to the Rassvet module, the shuttle is carrying about 1 tonof cargo inside the new Russian room and some spare parts for the nearlycomplete orbiting laboratory.

Station commander Oleg Kotov, a Russian cosmonaut, andcrewmates Timothy "T.J." Creamer of NASA and Japanese astronautSoichi Noguchi were aboard the Soyuz TMA-17 vehicle during the briefspaceflight. Two Russian cosmonauts and a NASA astronaut remained inside thestation during the move.