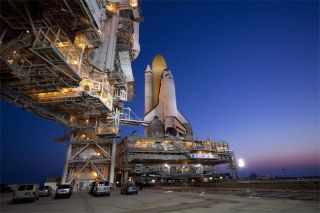 From top mission controllers on through the ranks of astronautsand shuttle workers, reverence reigns over the upcoming last flight of thespace shuttle Atlantis - the first of NASA's final shuttle missions this year.

Atlantis is set to make her 32nd and finalplanned launch from the Kennedy Space Center in Florida on Friday. Themission is the third-to-last shuttle flight ever. The orbiter is slated tocarry six astronauts and a new Russian science module to the InternationalSpace Station.

"There is a little bit of reverence that the missionwill be conducted with given that it?s the final planned flight ofAtlantis," said NASA lead shuttle flight director Mike Sarafin.

There is a small possibility that Atlantis will actuallytake to the skies again after this. The orbiter is tapped as the"launch-on-need" shuttle that would serve as an emergency rescue shipto save astronauts in the event of a major failure during the final shuttlemission on Endeavour, scheduled to launch no earlier than Nov. 26. [MemorableNASA missions.]

NASA is retiring its decades-old spaceshuttle fleet to focus on building new technology and rockets, such as avehicle to eventually take humans to asteroids or Mars faster than anything yetdeveloped. Meanwhile, President Barack Obama has proposed using privateindustry to pick up the slack in low-Earth orbit, with NASA relying on commercialspacecraft to ferry astronauts and paying passengers to the International SpaceStation.

While Atlantis' upcominglaunch is momentous for some, other NASA officials said they were morefocused on simply getting the job done.

"I have not spent a lot of time thinking about lastthis and last that," said John Shannon, NASA's space shuttle programmanager, during a briefing last week. "I think maybe after we get all done,then we'll release the big breath and then maybe think about what it all meantto us. But not while we're in the middle of actually processing and flyingthese vehicles."

"This is probably the kind of thing that's really goingto hit all of us after we're done with the mission and we realize what part ofhistory we may have played," Ham said. "I think the space shuttle asa machine is the single most incredible machine humanity has ever built? Theprogram has to come to an end at some point, and it is an honor and privilegefor us to represent being part of that crew at the end."

Atlantis'six-astronaut crew will launch on a planned 12-day mission to deliver thenew Russian "Rassvet" (which means "Dawn" in Russian)science module and vital spare parts for the nearly complete space station.Three spacewalks are planned for the mission.

Atlantis was the fourth shuttle built, after Columbia,Challenger and Discovery (Endeavour followed later as a replacement forChallenger).

Atlantis was named after a two-masted sailing ship thatserved as a research vessel for the Woods Hole Oceanographic Institute from1930 to 1966. It launched on its first space mission on Oct. 3, 1985.

Some of the past crews that have worked and flown onAtlantis will gather to watch its final liftoff this week, said astronautJerry Ross, a veteran of seven space shuttle missions, five of which have beenon Atlantis.

"I am looking forward to seeing it fly," Rosssaid. "It is a great flying bird. Personally I think it?s the best one ofthe fleet."