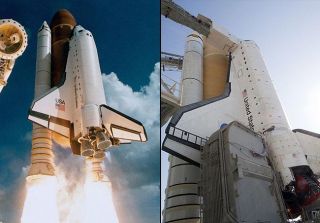 When space shuttle Atlantis lifts off later this week onwhat NASA has planned to be its final flight, helping to launch it will be arocket booster segment that first flew 25 years ago on the orbiter's maidenmission.

The almost quarter-century reunion between Atlantis and itsreusable solid rocket booster's casing is just one of the historicalconnections between the orbiter and its launch system. Including STS-132, 18 ofAtlantis' 32 flights are represented by the boosters' segments, underscoringthe legacy that NASA's fourth-to-fly orbiter will leave after it is retired.

Not that Alliant Techsystems, or ATK, NASA's contractor for theshuttle's solid rocket boosters, had history in mind when it selectedcomponents from its inventory to launch Atlantis on its finalflight.

"It was a coincidence," wrote Harry Reed, ATK'sprogram director for the reusable solid rocket motors (RSRM), in an e-mail to collectSPACE.com,referring to the first and last mission pairing. "The metal case segmentsare assigned based on hardware availability and fit considerations with matingsegments."

Even knowing it was a coincidence, the presence of theearlier missions' hardware elicited further reflection on the shuttle's historyby those who have and will fly aboard the orbiter to space.

"I'm glad that [the rocket boosters' history] was dug up,"said STS-132'spilot Tony Antonelli. "I think there are still a lot of people whodon't understand we reuse those solid rocket motors."

"It adds to the richness of the thoughts that I'll havewhen I watch Atlantislaunch this time, to know that there's a lot more of my heritage there thanI expected," said Jerry Ross, chief of NASA's Vehicle Integration TestOffice and the astronaut who has flown the most on Atlantis. Out of his seventotal flights, a record unto itself, Ross flew five times aboard Atlantis.

For Atlantis' final commander, the prior missions providecontext for his and his five crewmates' STS-132 flight.

"I guess I would have to say it's relativelyunremarkable," said Ken Ham, reflecting on Atlantis' final mission."From looking at the list of all the incredible things that Atlantis hasdone, let alone the other shuttles,this is [just] another mission to space station."

"From a personal perspective, it's remarkable -- butwhen you look at [Atlantis' history], it is probably not. Carrying aRussian-built module is a first and that is interesting," he said,referring to STS-132's primary payload, the Russian Mini Research Module-1(MRM-1) "Rassvet."

Space shuttle Atlantis' spaceflight career began on Oct. 3,1985, with the launch of STS-51J, a classified mission dedicated to theDepartment of Defense. It was the fourth orbiter manufactured followingColumbia, Challenger, and Discovery, and only Endeavour followed it.

Construction of Atlantis, referenced by NASA internally byits airframe number OV-104, began in March 1980 at the Palmdale, Calif.,manufacturing plant. It arrived at NASA's Kennedy Space Center in Fla., inApril 1985 ahead of its maiden mission.

Named after the primary research vessel for the Woods HoleOceanographic Institute in Massachusetts from 1930 to 1966, space shuttleAtlantis has carried on the spirit of the sailing vessel with voyages to theRussian station Mir and deployment of the Galileo probe to Jupiter in 1989 andthe Compton Gamma Ray Observatory in 1991.