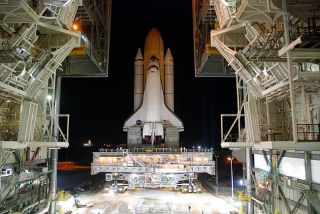 NASAhas cleared the space shuttle Atlantis for its last planned launch on May 14,the first of three final spaceflights planned for the U.S. space agency'sstoried space plane fleet.

Atlantisis officially set to blast off on May 14 at 2:20 p.m. EDT (1820 GMT) from NASA'sKennedy Space Center in Florida on a 12-day mission to the International SpaceStation. The shuttle's six-astronaut crew will deliver and install a new Russianscience module called Rassvet, which means "Dawn" in Russian.

"We'reready to go next Friday," NASA's shuttle program chief John Shannon toldreporters Wednesday. "It's been 15 days since we last landed, nine daysuntil we launch. This is the kind of pace that this team thrives on."

VeteranNASA astronaut Ken Ham, a U.S. Navy captain, is commanding the mission, whichwill mark the 132nd space shuttle flight in NASA history since the reusablespace plane fleet began flying in April 1981. It will be the 32nd flight forAtlantis, which made its first spaceflight in 1985.

"Thisflight has a little bit of everything," Shannon said of Atlantis' lastplanned spaceflight.

Thestation's new Rassvet module is a 23-foot (7-meter) cylinder equipped with asmall airlock for experiments that will be attached to an Earth-facing berth onthe station's Russian Zarya control module. It weighs about 17,147 pounds (7,777kg) and will double as a science room and docking port for visiting Russianspacecraft.

Atlantis'final planned mission has the sense of a true beginning of the end for NASA'sspace shuttle fleet. The orbiter has been flying since Oct. 13, 1985 (thefourth assembled after Columbia, Challenger and Discovery) and has launchedseveral interplanetary and classified missions.

"Thewhole team has been involved since its first mission in 1985," said NASAlaunch director Mike Leinbach. "Yeah, she's been around a long time and alot of us have known that ship for 25 years."

NASAplans to retire its three-shuttle fleet of Atlantis, Discovery and Endeavour inNovember after nearly 30 years of service. Discovery is slated to deliver astorage closet to the space station in mid-September, with Endeavour to launcha $1.5 billion astrophysics experiment to the orbiting laboratory no earlierthan Nov. 26.

Thesefinal missions will put the finishing touches on the nearly complete InternationalSpace Station, a $100 billion space outpost that has been under construction by16 different countries since 1998. NASA launched two other shuttle missionsearlier this year, in February and April, to continue space stationconstruction.

Afterthe finalspace shuttle mission, NASA will have to rely on Russian Soyuz spacecraftto launch American astronauts on round trips to the International SpaceStation.

InFebruary, U.S. President Barack Obama announced his proposed cancellation ofthe Constellation program in charge of building NASA's shuttle successor ? theOrion crew capsules and their Ares rockets. Obama has since revived the Orioncapsule to launch unmanned and serve as an escape ship for the space station.

Meanwhile,Obama has ordered NASA to support the development of commercial spacecraftcapable of launching Americans to the space station.

TheU.S. space agency currently has contracts in place with two commercialcompanies ? SpaceX in California, and Orbital Sciences in Virginia ? to launchunmanned cargo ships to resupply astronauts on the International Space Stationin the next few years.

Atlantis,however, will not be mothballed right after its final planned space missionthis month. NASA will keep the shuttle spaceworthy and ready to serve as arescue ship if needed for the final planned shuttle mission ? STS-134 aboardEndeavour ? in the fall.

Somelawmakers have been lobbying to use Atlantis, since it would be ready to cometo Endeavour's aid, to fly one last, extra supply flight to the space station,though NASA would have to get approval and funding for that flight by June tomake it happen, the agency's space operations chief Bill Gerstenmaier said.That extra mission would likely include just four crewmembers and a payload bayfull of station cargo, but no approvals or decisions have been made, he added.

Afterthe last shuttle mission, Atlantis, Discovery and Endeavour are due to be retiredto museums for public exhibition.

Leinbachsaid Atlantis' launch team has never lost focus for this next mission, but thereis a bittersweet feeling behind what is expected to be the orbiter's lastflight.

"Ourmission is coming to an end and our team is coming to grips with that,"Leinbach said. "But we're going to do it safely and surely, and we hope todo it next Friday."