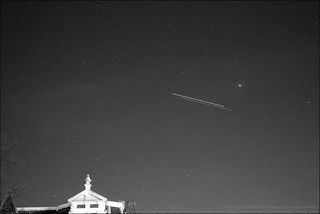 The sky is full of stars and galaxies, but eagle-eyed skywatchers can also spot satellites, space shuttles and stations from Earth too. Take a look at some of the best photos of spaceships caught on camera. NASA's space shuttle Discovery and the International Space Station are seen in this time-lapsed image as they fly over Leiden, The Netherlands, just before the two spacecraft docked on March 17, 2009 during the STS-119 mission. The shuttle is the object slightly fainter and lower in the sky. Movement is from right to left
(Image: © Marco Langbroek)

Skywatchers across the continentalUnited States will get a fine opportunity this weekend to watch as the space shuttleAtlantis — on its final scheduled mission into space — chasesand ultimately docks with the International Space Station (ISS).

Both the shuttleand space station will be visible as separate entities, each appearing asbright "stars" sailing across the evening twilight sky on Friday andSaturday. By Sunday evening, Atlantis will be docked to the ISS, and both willappear as a single bright moving "star."

Toreach the space station, Atlantis must be launched when Earth's rotationcarries the launch pad in Cape Canaveral, Fla. into the plane of the station'sorbit. [Photos: Spottingspaceships from Earth.]

Forthe upcoming STS-132mission, this will happen in the middle of a 10-minute launch window at 2:19:59p.m. ET on Friday, May 14. Atlantis will track to the northeast, roughlyparallel to the U.S. East Coast.? About 25 minutes later, the ISS, which willbe moving along a similar southwest-to-northeast path, will be passing overnorthern Florida.?

TheISS makes one full circuit of the Earth in approximately 91.5 minutes.Initially, Atlantis will be situated about 67 minutes behind the ISS, but overthe next 44 hours following its Friday afternoon liftoff, Atlantis willgradually close that gap, ultimately docking with the space station at 10:27a.m. ET on Sunday.

DuringFriday, Saturday and Sunday evenings, both Atlantis and the ISS will make anumber of favorable passes across the contiguous U.S.? Their respective groundtracks will take them on northwest-to-southeast paths.? With a very fewexceptions, between one and four crossings of both the shuttle and the ISS willbe visible.

Most satellites become visible only when they are in sunlight andthe observer is in deep twilight or darkness. This usually means shortly afterdusk or before dawn.

Because of its size and configuration of highly reflective solarpanels, the space station is now, by far, the brightest man-made objectcurrently in orbit around the Earth. On favorable passes, it?s as brilliant asmagnitude -5 in brightness, which would rival even the planet Venus, andoutshines Sirius, the brightest star in the night sky some 25-fold.

Some have even caught a glimpse of the ISS in the daytime justprior to sunset or shortly after sunrise. And as a bonus, sunlight glintingdirectly off the solar panels can sometimes make the ISS appear to brieflyflare to super-brilliance.?

The space shuttle also appears as a very bright (magnitude 0 to-1) object, almost matching Sirius, though nowhere near as dazzling as the ISS.

In February both shuttle Endeavour and the ISS could beviewed flying closely in tandem with one another across the sky, but that willnot be possible with these upcoming evening crossings of Atlantis and the ISS:Both will appear too widely separated on Friday and Saturday evenings.

Generally speaking, Atlantis and the ISS will be visible acrossparts of southern Canada and most of the 48 continental United States.

Many locations will be favored with as many as three or fourviewing opportunities. In contrast, Hawaii and Alaska will not have any viewingopportunities, nor will there be any views in Canada roughly north of latitude50 degrees.

Over the southernmost United States, the viewing opportunitieswill be reduced to just one or none at all. ?

Some localities will be favored with exceptionally good passes. OnFriday evening, the ISS will appear to soar to a point virtually overhead asseen from Toronto (9:10 p.m. ET) and New York (9:11 p.m. ET).

A similarly high overflight of the ISS will be visible from Chicagoon Saturday evening (8:33 p.m. CT), and the two docked spacecraft will passalmost directly over Flagstaff, Arizona on Sunday evening (8:30 p.m. MT).

Sowhat is the viewing schedule for your particular hometown? You can easily findout by searching for one of these four popular Web sites: Chris Peat's HeavensAbove, Science@NASA's J-Pass, NASA's SkyWatch and Spaceweather.com.

Eachwill ask for your zip code or city, and respond with a list of suggestedspotting times. Predictions computed a few days ahead of time are usuallyaccurate within a few minutes. However, they can change due to the slow decayof the space station's orbit and periodic reboosts to higher altitudes. Checkfrequently for updates.

Anothergreat site is this one, whichprovides real-time satellite tracking and shows what part of the Earth the ISSor shuttle happens to be passing over at any given time.?? ??