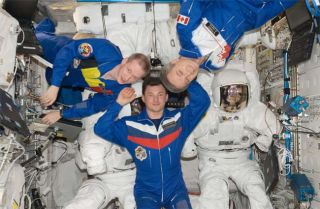 A Canadian, a Russian and a Belgian astronaut left theInternational Space Station and landed on the icy steppes of Kazakhstan Tuesdayaboard a Russian Soyuz spacecraft.

The landing went smoothly, though the subzero temperaturesin Kazakhstan prevented helicopters from flying to retrieve the crew as usual.Instead, the Russian Federal Space Agency sent teams in all-terrain vehicles torecover the spaceflyers.

The three crewmembers are finishing a six-month tour of dutyon theorbiting laboratory. When their spacecraft left the outpost theirExpedition 21 mission officially ended and the new Expedition 22 began.

"As the first European commander, it has been a greathonor to be able to fulfill this role, and I could have only done this thanksto the help of my colleagues," DeWinne said during a change-of-commandceremony Nov. 24, when he handed over control of the station to NASAastronaut Jeff Williams.

The station is now down to a barebonescrew of two ? Williams and Russian cosmonaut Maxim Suraev ? for a period ofabout three weeks.

The departing crewmembers said they were eager to be back onthe ground.

"I miss my family most of all, of course," Thirsksaid during an in-flight news conference last week. "I am already dreamingof those first hugs when I see my family in Moscow. After that is nature. I missthe wind; I miss the sunlight, the smell of flowers, and freshly cut grass."

The spaceflyers said they became close during the longmonths living and working together in close quarters.

Romanenko is the son of veteran cosmonaut Yuri Romanenko,who commanded three space missions in the 1970s and 1980s.

During their tenure three space shuttle flights visited thestation to deliver new parts and equipment, and at one point a record threeSoyuz spacecraft were simultaneously docked at the outpost.

Thirsk said a highlight was the HTVmission to deliver food, computers and other supplies. The flight representedthe first flight of the untried vehicle.

"The most exciting moment was the arrival of the HTVJapanese cargo vehicle," Thirsk said. "That went off perfectly."