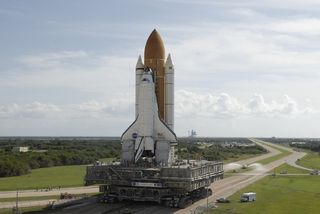 The launchpad delivery of a container filled with new equipment bound for the HubbleSpace Telescope next month has been delayed by at least a day due to loose insulation,space agency officials said Wednesday.

NASAworkers were set to move Hubble?s delicate replacement parts to LaunchPad 39A at the agency?s Kennedy Space Center on Thursday to be installed aboardthe space shuttle Atlantis for a plannedOct. 10 launch, but will now have to clean up bits of insulation beforemaking the move, said Allard Beutel, a NASA spokesperson at the center there inCape Canaveral, Fla.

Theinsulation came loose while shuttle technicians were installing aplastic-wrapped cargo carrier containing some of Hubble?s replacement batteriesand the new Wide Field Camera 3 into a container for the short trip to thelaunch pad.

?Webasically have some insulation particles floating around inside the protectivebagging,? Beutel told SPACE.com, adding that technicians now have toopen the bag and clean up any contamination before proceeding. ?So right nowwe?re probably looking at probably a 24-hour delay to going out to the launchpad with the payload.?

NASA isstill targeting an Oct. 10 launch for Atlantis? STS-125mission to Hubble while engineers assess how much time the clean up workmight require. Commanded by veteran spaceflyer Scott Altman, Atlantisastronauts plan to stage five back-to-back spacewalks to install newinstruments, batteries, gyroscopes, as well as make unprecedented repairs and adda docking berth to Hubble. The mission, NASA's fifth and final planned Hubble overhaul, is expected to run about 11 days andextend the telescope's orbital life through 2013.

Beutel saidNASA engineers are optimistic that the insulation clean up job will be quick,and mission managers have not yet indicated any plans to delay Atlantis? launchdate.

?They?lladjust it if they have to, but at the moment there?s no need to,? Beutel said,adding that Atlantis? payload could be delivered to the seaside launch pad bylate Friday if all goes well.

Meanwhile,NASA officials are also working to clean up the agency?s Johnson Space Centerin Houston after Hurricane Ike battered that center with rain and caused minordamage last week. Space agency officials have said the repair work should nothave an impact on Atlantis? planned launch, though it did delay the arrivalof an unmanned Russian cargo ship at the International Space Station byseveral days.

Endeavouris being prepared for a planned November mission to the space station, but mustfirst serve as a rescue ship for the Hubble shuttle flight. Because they mustfly to a higher orbit and in a different inclination than the space station toreach Hubble, Atlantis astronauts will not be able to reach the safe haven ofthe orbiting laboratory if their shuttle suffers critical damage.

Instead,NASA will ready Endeavour and a small, four-astronaut crew for the unlikelyevent a rescue is required. Upon Atlantis? safe return home, Endeavour is dueto move to Launch Pad 39B for a planned Nov. 12 liftoff, NASA officials havesaid.