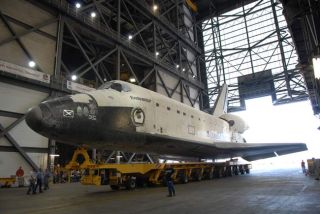 ?They?llattach the orbiter to its external fuel tank and the solid rocket boosters onthe Mobile Launch Platform,? Thomas said of the upcoming work. Engineers planto roll the spacecraft out of the 52-story Vehicle Assembly Building and on toits seaside Pad 39B launch site on Sept. 18. The shuttle Atlantis is alreadyperched atop the nearby Pad 39A for its planned launch next month.

Endeavouris slated to launch newsupplies and equipment to the International Space Station (ISS) for NASA?sSTS-126 mission set to lift off on Nov. 12. But the shuttle is also pullingdouble duty as a rescue ship for its sister ship Atlantis, which is currentlyscheduled to launch seven astronauts on a finalservice call to the Hubble Space Telescope on Oct. 10.

Because Atlantismust fly in a higher orbit and different inclination than the space station toreach Hubble, the shuttle will not be able to ferry its crew to the ISS toawait rescue if the spacecraft suffers critical damage. Instead, NASA ispreparing Endeavour and a minimal four-astronaut crew to launch a rescuemission and retrieve the Atlantis crew in a series of three unprecedented shuttle-to-shuttlespacewalks. Mission managers and Atlantis? STS-125 astronauts have said itis extremely unlikely they?ll ever need the plan, but it was vital to beprepared.

Whileengineers in Florida prepare Atlantis and Endeavour for their respectivelaunches, NASA officials closed the Johnson Space Center in Houston due to thethreat of violent weather associated with Hurricane Ike.

Currently aCategory 2 hurricane, Ike is centered about 470 miles (760 km) east-southeastof Galveston, Texas, with maximum sustained winds reaching speeds of 100 mph(160 kph), according to the National Hurricane Center. The storm is expected tostrengthen into a major hurricane before reaching the Texas gulf coast thisweekend, the center reported.

The JohnsonSpace Center is home to NASA?s astronaut training facilities and MissionControl centers for space shuttle flights and the International Space Station. Thespace station Mission Control was also closed, with back up teams in place nearAustin, Texas, and in Hunstville, Ala., NASA officials said.

The spacecenter?s closure will require NASA to suspend training activities for theSTS-125 astronauts preparing for the HubbleSpace Telescope overhaul. It also delayed plans for a mission readinessmeeting originally targeted for today.

Thomas saidthat Atlantis? STS-125 crew is due to head to the Kennedy Space Center on Sept.21 for several days of launch rehearsal training. Any scheduled changes due toHurricane Ike, if any, will be assessed next week, she added.

?We don?tknow if it will have an impact, but for right now everything is still scheduledthe way that it was,? Thomas said.