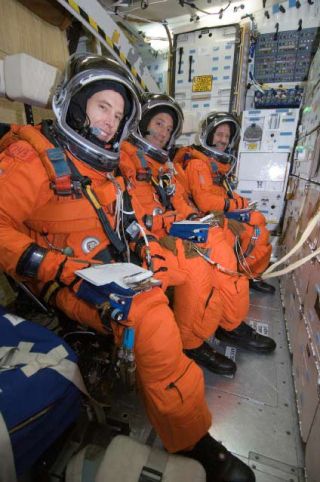 Astronauts Andrew Feustel (foreground), Michael Massimino and John Grunsfeld, all STS-125 mission specialists, take a moment for a photo during a training session in the middeck of one of the full-scale trainers in the Space Vehicle Mockup Facility at NASA's Johnson Space Center while preparing for the final Hubble Space Telescope servicing mission.
(Image: © NASA.)

Commandedby veteran astronaut Scott Altman, the STS-125 astronaut crew and NASA?s spaceshuttle Atlantis are setto launch on Oct. 10 and soar 350 miles (563 km) above Earth to reachHubble, which would leave the crew without the safety net of the InternationalSpace Station to fall back on in case of emergency. But the crew?s threeveterans of previous Hubble servicing flight are confident of mission success.

"Ithink about how much more we know now about the environment, our inspectioncapability, and our repair capability," said Altman, a retired U.S. Navycaptain making his second trip to Hubble, in a briefing here at NASA?s JohnsonSpace Center. "This is a mission that can and should be flown."

Atlantismission specialists John Grunsfeld and Michael Massimino also bringspacewalking experience with Hubble to the rest of the crew, which includesshuttle pilot Gregory C. Johnson and mission specialists Andrew Feustel,Michael Good, and Megan McArthur. Grunsfeld is making his fifth spaceflight —and third to Hubble — while the flight will be Massimino?s second to theobservatory.

Grunsfeldand Feustel anticipate conducting three of the five spacewalks scheduled overfive days, while Massimino and Good plan to handle the remaining two excursionsto repair Hubble. McArthur will serve as a quarterback of sorts by moving thespacewalkers about on the shuttle's robotic arm.

"I'mreally excited to be this close to flight," said Tony Ceccaci, lead flightdirector for the shuttle mission, during a briefing in Houston. "We're amonth away. The team is ready."

SinceAtlantis must fly to a higher orbit and along a different inclination that thespace station to reach Hubble, itscrew will be unable to seek refuge if their spacecraft?s vital heat shieldis damaged. Instead, NASA shuttle commander Dominic Gorie heads anotherfour-person crew that would launch on Atlantis? sister ship Endeavor as alast-ditch rescue option, if required. NASA plans to ready Endeavour for launchatop a second launch pad before Atlantis lift off, but mission managers andAltman view the scenario as extremely unlikely.

Atlantismust also rely upon a more extensive inspection with its camera and lasermounted on a long orbiter boom, instead of the usual visual inspection from thespace station crew. A nine-hour inspection on the second day of flight adds theunusual step of eyeballing the belly heat tiles that protect the shuttle duringfiery reentry.

Theremote possibility of having to make their way from Atlantis to Endeavour meansthat all seven Atlantis crew members are certified spacewalkers.

Bothshuttle crews have spent time practicing their contingency spacewalks if arescue mission took effect, but the focus of the Atlantis crew remains ongetting Hubble back into shape.

"Ifwe ever did get into a rescue situation, it's relatively straightforwardcompared to anything we're doing in the Hubble nominal mission," Grunsfeldsaid.