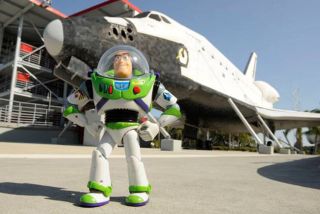 Fulfilling his longtime dream to fly to "infinity...and beyond!" a 12-inch-tall Buzz Lightyear action figure toy will be the special guest on the launch of space shuttle Discovery.
(Image: © Disney)

Ifyou listen closely on Saturday, when NASA launches the space shuttle Discoveryon a 14-day mission to the International Space Station, you may just hear thevoice of the STS-124 crew's special guest eighth astronaut.

He'llbe the one exclaiming, "To infinity... and beyond!"

Standing12-inches tall, Buzz Lightyear, the action figure who thought he was a realspace ranger in the 1995 film "Toy Story", will achieve his dreamof flying in space as part of a new educational partnership between NASA andthe Walt Disney Company.

Withthe help of Discovery's crew, who will deliver a newJapanese science laboratory to the orbiting outpost, BuzzLightyear will fly into the space station, where he will 'live' for sixmonths as part of NASA's "Toys in Space" effort. Once on-board, thecharacter will introduce 'fun elements' from space into science and mathclassrooms across the country.

"TheSpace Ranger Education Series will give teachers an opportunity to incorporatea fun and engaging moment into the classroom with a character that childrenreally love," said Jay Rasulo, chairman of Disney's Parks and Resorts.

Jointlydeveloped by Disney's Youth Educational Series and NASA, the online SpaceRanger Education program includes educational games for students and materialsfor educators to download and integrate into their classroom curriculum.

Thegames, which debut for play starting on Saturday through NASA's website,feature Buzz Lightyear and are themed around the events to take place duringSTS-124. Children can choose trying to dock the Japanese science lab to thestation, match international partners with their contributions to spaceexploration, or try loading cargo in Discovery's payload bay.

Anotherof the five games invites kids to navigate Buzz Lightyear to different populartoys to see a movie on how they behave in space. The videos, shot on-boardearlier shuttle and station missions, feature U.S. astronauts and Russiancosmonauts playing with yo-yos, basketball and soccer balls, and a gyroscope,among other examples.

Since1985, NASA's Toys in Space program has used toys to help children learn scienceand math by predicting and then observing how common toys will work in zero-g.

Duringhis time in space, Buzz Lightyear will participate in a similar experiment andappear in a video downlink from the ISS along with U.S. flight engineer GregoryChamitoff.

Buzzwill also contribute a journal about his adventures in space, which will beposted to the NASA website.

Asixth game will debut in the fall, to coincide with Buzz's return from spaceand students' return to school.

Accordingto Disney Parks spokesman Duncan Wardle in an interview with collectSPACE.com,Walt Disney World plans to throw a ticker tape parade welcoming Buzz Lightyearback to Earth before placing him on public display in the resort. Though thelocation for the exhibit isn't yet known, one candidate, said Wardle, is nearToy Story Mania!, the new attraction opening on May 31 at Disney's HollywoodStudios in Florida and June 17 at Disneyland in California.

Gueststo both resorts will be able to take home their own replica of the space-flownBuzz Lightyear. Thinkway Toys is reintroducing the original 12-inch action figurethey sold in 1995 exclusively through Disney Parks' gift shops.