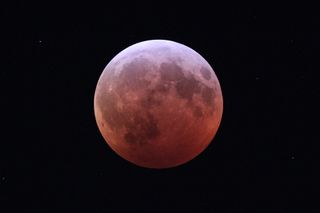 The Super Blood Wolf Moon eclipse was a sight to behold.

Millions of people saw the full moon slide into Earth's shadow last night (Jan. 20) and turn a gorgeous coppery-red, in the last total lunar eclipse until May 2021. And a fair few of those folks captured stunning imagery of the sky show to help tide us over for the next 28 months.

"Despite wearing gloves and two layers of wool socks, we couldn't feel our fingers and toes anymore by the time totality ended," the duo told Space.com via text message.

"We've seen and photographed so many total lunar eclipses in the past, so we could have chosen to just watch through the window," they added. "But our passion to share this wondrous event with other people who couldn't see it drove us to go outside and capture the eclipse with our camera and telescope. It really takes dedication to endure the extreme weather. We're so lucky the sky cleared up in time for the eclipse!"

(In case you were wondering, Joson and Aguirre used a Meade 80-mm f/6 apochromatic triplet refractor and a Canon EOS 7D DSLR camera.)

Joson and Aguirre weren't the only ones to capture the eclipse's progression. Astrophotographer Tony Corso combined 10 shots, taken from South Carolina, into a composite that shows Earth's nearest neighbor transitioning from familiar silvery-white orb to shadow-darkened crescent to startlingly ruddy sky sphere.

Zaid Abbadi did something similar, showing the eclipse take hold over Amman, Jordan.

Alexander Krivenyshev of WorldTimeZone.com got a great shot of the blood-red moon over the sparkling Manhattan skyline, as seen from Guttenberg, New Jersey.

Kevin Clarke, observing the eclipse from his backyard near Fort Collins, Colorado, saw the event unfolding against a gorgeous halo in the sky. He managed to get the full effect, after combining images taken with two different cameras and doing a little photo-editing work.

"I had been shooting with my Nikon P1000 at around 2000mm, getting great shots of the moon. I noticed the halo and couldn’t believe my eyes. I tried to capture the halo with my Nikon, but it was too wide and the Nikon could not capture the subtle light of the halo," Clarke told Space.com via email.

"I ran in and got my Cannon 7D with a 16-35mm f2.8, and it was just able to reach the edges of the halo in the frame. I shot the halo at ISO 1000, f5.6, 10sec so the clouds would have just a little wispiness and movement," Clarke added. "The moon was blown out due to the long exposure, so I replaced it with the fully eclipsed moon shot on the Nikon at ISO 1600, f6.3, 0.4sec. A little Photoshop layering and some basic exposure adjustments, and voila!"

And lest you think the Super Blood Wolf Moon was just a Northern Hemisphere event: Yuri Beselsky got a great shot of the eclipsed moon peeking through tree branches in Santiago, Chile — though the weather almost didn't cooperate.

"After a week of perfect weather just in the morning of the day of the eclipse, clouds came out of nowhere! It was unbelievable — in the middle of summer in Chile we faced a real possibility to miss the eclipse," Beselsky said via email. "I had some ideas to take wide-field images of the eclipse, but thick high-altitude clouds over Santiago and surroundings made this task impossible. Although the moon was visible, but the sky was not good at all. Walking around, I suddenly noticed a line of trees along the road which had quite interesting tree crowns. Never planned that, but the view of the moon through the trees turned out to be quite intriguing."

Many other readers sent in great photos as well; I'll get out of the way now so you can take a look at some of them. And check out the Super Blood Wolf Moon gallery to see more! (Apologies if you don't see your photo below or in the gallery; we got tons of submissions and couldn't feature them all.)

Editor's note: If you captured an amazing photo of the Super Blood Wolf Moon Eclipse and would like to share it with Space.com for a story or gallery, send images and comments to managing editor Tariq Malik at spacephotos@space.com.

Space.com managing editor Tariq Malik and staff writer Hanneke Weitering contributed to this story. Mike Wall's book about the search for alien life, "Out There" (Grand Central Publishing, 2018; illustrated by Karl Tate) is out now. Follow him on Twitter @michaeldwall. Follow us @Spacedotcom or Facebook. Originally published on Space.com.