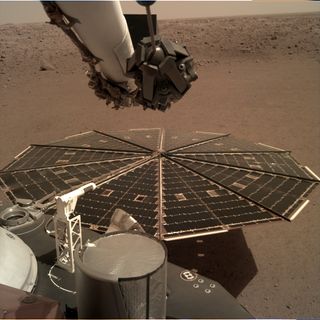 One of the two expansive solar arrays on NASA's InSight Mars lander dominates this view of the probe's Martian home, the plain of Elysium Planum, as seen on Dec. 4, 2018.
(Image: © NASA/JPL-Caltech)

NASA's Mars InSight lander, which touched down on the Red Planet Nov. 26, is starting to settle into its new home and prepare for its scientific work — and the robot has shared three new photographs of its progress with its minders here on Earth.

The lander transmitted all three images taken by its Instrument Deployment Camera to Earth on Dec. 4. The images will help the team behind the lander make sure everything survived its dramatic journey to the Martian surface safely and will guide their decisions about precisely where to deploy individual instruments, a critical process during the spacecraft's first weeks at its destination.

"Today we can see the first glimpses of our workspace," Bruce Banerdt, InSight's principal investigator at NASA's Jet Propulsion Laboratory, said in a statement released with the images. "By early next week, we'll be imaging it in finer detail and creating a full mosaic." [NASA's InSight Mars Lander: Amazing Landing Day Photos!]

As planned, InSight's workspace is lacking in dramatic landmarks, mainly sporting a flat vista and some rocks. The mission team purposely chose a seemingly boring site for the landing in order to ensure the highest probability of a successful touchdown.

The InSight team had been expecting more photographs this weekend from its newly arrived lander. However, the lander is programmed to be particularly sensitive to anomalies until it settles in to its new home, and a slip into fault mode briefly prevented the photostream from leaving Mars. The team is not particularly concerned about the incident, according to the statement.

"We did extensive testing on Earth. But we know that everything is a little different for the lander on Mars, so faults are not unusual," Tom Hoffman, InSight project manager, said in the statement. "They can delay operations, but we're not in a rush. We want to be sure that each operation that we perform on Mars is safe, so we set our safety monitors to be fairly sensitive initially."

Once engineers have finished checking up on all the instruments, they'll need to decide where to place the instruments, which may not occur for another two or three months. It will do so using the folded-up claw visible in two of the new images.

Those instruments will help InSight solve mysteries about the interior of Mars, including its structure and how heat flows through it. Scientists hope that with this new data, they will better understand how Mars — and the rest of the planets, including Earth — formed.