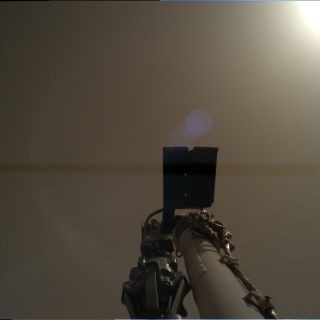 NASA's InSight Mars lander captured this image using the Instrument Deployment Camera, which is mounted on the lander's robotic arm. The photo was taken on Nov. 30, 2018, just four days after InSight touched down.
(Image: © NASA/JPL-Caltech)

The image was taken by InSight's Instrument Deployment Camera, which is situated about two-thirds of the way down the lander's 5.75-foot-long (1.8 meters) arm. The black rectangle at the top of the picture is a scoop, and the arm's claw-like grapple hangs below, pointing toward InSight's deck. [NASA's InSight Mars Lander: Amazing Landing Day Photos!]

That five-fingered, wax-actuated grapple is vital to the success of InSight's $850 million mission, which seeks to map the interior of Mars in unprecedented detail. The lander will use the claw to place its two main science instruments — a burrowing heat probe and a suite of seismometers — directly on the red dirt of Elysium Planitia. InSight will also put a thermal and weather shield over the seismometers, which are so sensitive that they can detect seismic waves with the amplitude of a single atom.

The stationary lander won't be ready to begin these deployments until two to three months after landing, NASA officials have said. The mission team wants to study InSight's environs in depth for a while, to make sure they pick the right deployment spots and have practiced the crucial moves sufficiently. That practice is done using a test-bed lander at the mission's home base, NASA's Jet Propulsion Laboratory in Pasadena, California. (The scoop is pretty much for emergencies only, in case InSight needs to do some landscaping to ease deployment. Mission team members have said they don't expect to use it.)

The measurements InSight makes over the next Mars year (nearly two Earth years) should help scientists better understand how rocky planets in general form and evolve, NASA officials have said.

Elysium Planitia lies about 340 miles (550 kilometers) from Gale Crater, which NASA's car-size Curiosity rover has been exploring since August 2012. Curiosity has been a very supportive older sibling, welcoming InSight to Mars and congratulating the lander for ticking off important milestones (all on Twitter, of course).

"Put your robotic arms in the air, make 'em stay there! All @NASAInSight does is win. Check out this new pic of arm and scoop from my new neighbor on #Mars, plus a bunch more raw images: http://go.nasa.gov/InSightRaws," the Curiosity team said on Nov. 30 via the rover's Twitter account, highlighting InSight's raised-arm photo.