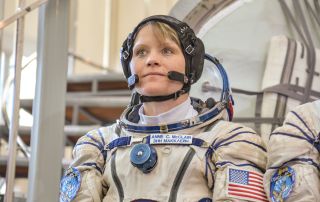 NASA astronaut Anne McClain is set to fly to the International Space Station from the Baikonur Cosmodrome in Kazakhstan on Dec. 3, 2018.
(Image: © Elizabeth Weissinger/NASA)

The launch of Expedition 58 may be one of the last for U.S. astronauts aboard Russian Soyuz rockets.

On Dec. 3, NASA astronaut Anne McClain is expected to take her first spaceflight aboard Soyuz, as every U.S. astronaut has done since 2011. But starting as early as next year, U.S. astronauts will climb on board commercial crew vehicles manufactured and launched from the United States.

It's been a long journey for NASA, which has been pushing a crew program to completion (in spite of multiple delays) ever since the space shuttle program was retired in 2011. That happened just after construction on the International Space Station finished. Since then, NASA has had no way of flying astronauts into space from the United States. Instead, all space station astronauts have had to fly from remote Baikonur, Kazakhstan, for prices that are now more than $70 million a seat. [A Baikonur Soyuz Launch During Cold War]

The Russian Soyuz spacecraft and Soyuz rocket have each performed well, to be sure. The system is well-regarded for its ability to launch in just about any weather, something that the space shuttle could not do. Also, the only Soyuz flight in eight years that was derailed was an abort in October of this year, when two crewmembers aboard Expedition 57 came back safely to Earth after only a few minutes in flight. (A deformed sensor in the rocket caused the abort, and the Russian space agency, Roscosmos, quickly authorized flights to resume.)

But Americans have been eager to see flights again on their own soil, not only because of national pride, but also because of the opportunities that it will bring for industry across the country.

The first commercial crew test is scheduled for Jan. 7, when an uncrewed version of SpaceX's human-rated Dragon spacecraft will lift off on a Falcon 9 rocket from Florida's Space Coast, near Orlando. It's the same area where every U.S. space mission with astronauts, including the space shuttle and the Apollo moon missions, has launched starting in 1961. Boeing's CST-100 Starliner will run its first uncrewed flight later in 2019.

SpaceX, in particular, has industry attention, because the company is known as a disruptive force. The Hawthorne, California-based firm was among the first companies to develop and land reusable first stages for rockets, a feat unimaginable even a decade ago. The company was also the first to run commercial cargo flights to the space station, starting in 2012.

SpaceX is already changing how cargo launches are done, and it may do the same for human launches, said a representative of the Commercial Spaceflight Federation. That's a group of more than 80 companies who are working together to build the space economy, including reducing the cost of access to orbital opportunities.

"We anticipate that history will repeat itself," Tommy Sanford, executive director of the federation, told Space.com in an email. "Just like the last time a low-cost, regular and reliable launch-service provider, like SpaceX, entered the market, cost decreased, access increased and a whole new economic ecosystem of activity — cubesats — emerged. We anticipate [that] a similar pattern will emerge when commercial crew comes online, which will bring about the birth of new ideas and opportunities previously not possible."

Adding commercial crew to the mix of human launch systems will once again open up competition and innovation, said Rich Cooper, the Space Foundation's vice-president of strategic communications and outreach. That will happen not only between Boeing and SpaceX, but also among the fleet of suppliers and partners that help the two U.S. companies get their spacecraft off the ground, he said.

"The Soyuz isn't the only tool in town," Cooper told Space.com. "It's not the only resource we can tap. The entire Boeing-SpaceX commercial crew effort really gives the best of all worlds, of all options. Options provide creativity and benefit and potential. So that's what's really exciting about this."

Cooper also pointed to a "reigniting of national pride" because the United States will finally resume its role of sending astronauts into space — a status the country enjoyed, with a few gaps, between 1961 and 2011. The current stretch is the longest time any American has waited to go into space from U.S. soil since the beginning of the Space Age.

From 1961 to 1966, flights ran at least yearly using spacecraft from one program or another: the Mercury one-person capsule or the Gemini two-person craft that practiced docking and spacewalks. The first Apollo mission was supposed to lift off in 1967 to practice for moon work, but after the fatal Apollo 1 fire, the first crewed flight was pushed back to 1968. Apollo missions then ran frequently between 1968 and 1972.

U.S. astronauts flew into space three times in 1973 for Skylab space station missions; then, the next U.S. crew joined with a Soviet mission for Apollo-Soyuz in 1975. Following that was a six-year gap until the space shuttle was ready for flight, in 1981. Flights were interrupted for two years each after the Challenger and Columbia space shuttles' fatal accidents of 1986 and 2003, respectively. But for the most part, the shuttle kept astronauts going into space and back again between 1981 and 2011.

In 2010, just as the space shuttle program wrapped up, NASA began offering money to companies interested in developing commercial crew vehicles. SpaceX and Boeing were selected in 2014. Developing commercial crew vehicles wasn't supposed to take this long, but budgetary cutbacks and technical complexities pushed the program launch back several years, with a possible crewed launch scheduled for 2019 or 2020.