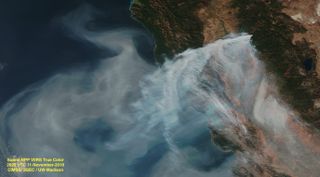 Fire season in California doesn't seem to end anymore, as eerie satellite images of staggering smoke clouds looming over the state remind us.

The Camp Fire, which is scorching its way across Northern California about 80 miles (130 kilometers) north of Sacramento, has become the deadliest blaze in the state's history after devastating the town of Paradise. At the same time, Southern California battles its own late-season fire, the Woolsey Fire. [In Photos: The 2018 California Wildfires as Seen from Space]

According to The New York Times, the Camp and Woolsey fires combined have killed at least 44 people and destroyed 6,400 homes and 217,000 acres (880 square km) of land. Smaller fires are also still burning: Cal Fire, California's firefighting center, is tracking 16 uncontrolled fires in the state.

The devastation those fires have left in their wake is dramatic enough to be seen from space. NASA's Jet Propulsion Laboratory has a group called the Advanced Rapid Imaging and Analysis team, which uses radar satellite data to quickly map changes on Earth's surface. By comparing measurements taken before the fires started with those gathered on Nov. 10 or 11, the team has pinpointed the severity of destruction even as the blazes continue to burn.

Satellite aren't just monitoring the blazes; they're also working to forecast the weather and how it may affect the fires. Unfortunately, those forecasts currently expect dry weather to continue until next week, which could make battling the fires still more challenging.