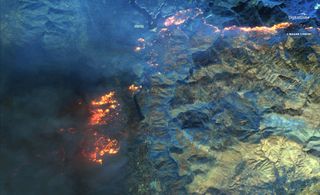 As wildfires continue to burn in California, new satellite photos show the massive scale of the deadly Camp Fire that has devastated the state's northern town of Paradise.

The new wildfire photos, taken Friday (Nov. 9) by DigitalGlobe's WorldView 3 satellite, show striking views of the Camp Fire as it continues to grow in northern California. Natural-color satellite photos show thick smoke from the fires around Paradise other nearby towns. Other views taken with WorldView-3's shortwave infrared instrument, which can peer through the smoke, reveal the fire lines as the wildfire spreads.

"As you will see in the images, the wildfires are extensive and spreading through the area," DigitalGlobe representatives said in a statement. [In Photos: The 2018 California Wildfires as Seen from Space]

NASA has been tracking California's late-season wildfires with its Earth-watching Landsat 8 and Terra satellites since the Camp Fire began on Thursday (Nov. 8). The fire ignited in an area about 90-miles (140 kilometers) north of Sacramento.

"Strong winds pushed the fire to the south and southwest overnight, tripling its size and spreading smoke over the Sacramento Valley," NASA's Kasha Patel wrote in an update Friday (Nov. 9). The Camp Fire has only grown since then.

As of Sunday (Nov. 11), the Camp Fire had become California's third-deadliest wildfire, with 23 deaths attributed to the blaze, CNN reported. It has burned 105,000 acres, destroying the town of Paradise, and is about 20-percent contained, according to a Cal Fire update.

"More than 2,000 personnel have been sent to fight the Camp Fire, which is predicted to be fully contained by Nov. 30," Patel wrote in the NASA update. "Firefighters are having difficulty containing it due to strong winds, which fan the flames and carry burning vegetation downwind. The area also has heavy and dry fuel loads, or flammable material."

For the latest updates about these and other California blazes, go to Cal Fire's "Incidents" page.