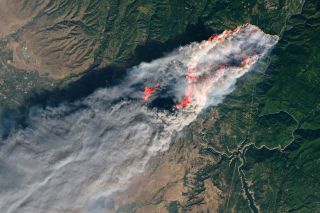 California is burning again, and satellites are showing the scope of the damage.

The Landsat 8 spacecraft, which is run jointly by NASA and the U.S. Geological Survey (USGS), captured dramatic imagery Thursday (Nov. 8) of the Camp Fire. The fast-moving blaze has destroyed the Northern California town of Paradise, killed at least nine people and sent smoke billowing across much of the state.

NASA's Terra satellite also snapped a photo of the Camp Fire's plume, in a wide shot that included a view of the Hill and Woolsey fires in Southern California. [In Photos: The 2018 California Wildfires as Seen from Space]

The Camp Fire started at about 6:30 a.m. PST Thursday. By Friday evening (Nov. 9), it had scorched about 90,000 acres (36,400 hectares) and remained just 5 percent contained, according to the California Department of Forestry and Fire Protection (Cal Fire).

Together, the Woolsey and Hill fires had burned nearly 40,000 acres (16,200 hectares) in Ventura County, just north of Los Angeles, by Friday evening.

For the latest updates about these and other California blazes, go to Cal Fire's "Incidents" page.

This has been a particularly destructive and tragic year for wildfires in the Golden State. Over the summer, for example, the Mendocino Complex Fire burned 459,123 acres (185,800 hectares) — more ground than any other wildfire in the state's history.

Also this summer, the Carr Fireraged through Shasta and Trinity counties, destroying more than 1,500 buildings and causing eight deaths, according to media reports.