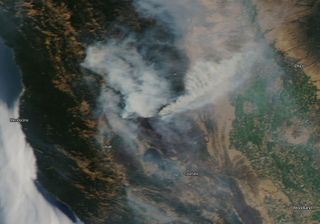 The Mendocino Complex Fire, the largest wildfire in California's history, releases clouds of smoke in new photos from NASA, and fires blazing over Canada are visible from a million miles away in space.

The Mendocino Complex Fire, spurred onward by high temperatures, low humidity and winds, has continued to expand. As of Tuesday (Aug. 14), the fire had burned 354,410 acres and was 68 percent contained, according to a statement from NASA. The blaze is made up of two different fires, the River Fire and the Ranch Fire — as of Tuesday, the River Fire was contained but the Ranch Fire continued to spread north, NASA officials said. [In Photos: The 2018 California Wildfires as Seen from Space]

The crew of the International Space Station have been posting photos of the fires visible on Earth, but they're not the only eyes from the sky: NASA's image releases come from Goddard Space Flight Center's Earth Science Data and Information System (ESDIS) project, which pulls together satellite observations from Earth and makes it available to the community.

Another set of images, taken by the Suomi NPP satellite on Aug. 15, run jointly by NASA and the National Oceanic and Atmospheric Administration (NOAA), shows the far-ranging effects of smoke over North America from fires across the western U.S. and Canada.

The smoke mostly rises high into the atmosphere and doesn't cause an immediate threat, NASA officials said in another statement, but it can be pulled back down as it moves east and affect the Earth's surface. And the fires can cause sooty black-carbon pollution, which creates problems when breathed in.

"Plenty of smoke and airborne particles have been measured near the ground, where it affects the air that people breathe," NASA officials said in the statement. "According to the National Weather Service in Seattle, the air quality in Washington state on August 15 was the worst in the country due to winds carrying smoke from surrounding fires." The next day, wind swept the smoke out somewhat, likely improving conditions.

Air quality also was recorded as unhealthy in parts of Northern California, Oregon, Idaho and Montana, they added. More than 500 wildfires in British Columbia added to bad air-quality conditions in Canada's Alberta, Saskatchewan and Manitoba provinces.

Canada's fires can even be seen from 1 million miles away (1.5 million kilometers), by a NASA instrument on NOAA's DSCOVR satellite, which launched in 2015 to give a long view of Earth's sphere and also track space weather.