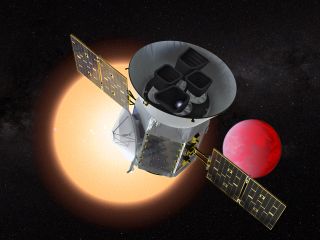 NASA's newest planet-hunting mission has reported detecting its first alien world — a "super-Earth" that is likely evaporating under the heat from its star, a new study finds.

The Transiting Exoplanet Survey Satellite (TESS) launched to Earth orbit on April 18 atop a SpaceX Falcon 9 rocket. The space telescope is analyzing several hundred thousand of the brightest stars in the sun's neighborhood, looking for tiny dips in brightness caused by the passage (or "transit") of orbiting planets as small as Earth across the faces of those stars.

The scientists have used TESS data to discover a new planet around the star Pi Mensae, also known as HD 39091, which is located about 59.5 light-years from Earth in the constellation Mensa, the table. Pi Mensae is a yellow dwarf star like the sun and the second-brightest among stars known to have transiting exoplanets. [NASA's TESS Exoplanet-Hunting Mission in Pictures]

Previous research had already spotted a gas giant around Pi Mensae that's about 10 times more massive than Jupiter. This exoplanet, named Pi Mensae b, has a highly oval-shaped "eccentric" orbit that carries it up to 3 astronomical units (AU) nfrom its star. (One AU is the average distance between Earth and the sun — about 93 million miles, or 150 million kilometers.)

Now, scientists have detected a new world around Pi Mensae — one about 2.14 times Earth's diameter and 4.82 times Earth's mass. This super-Earth, h dubbed Pi Mensae c, orbits about 0.07 AU from its star, or more than 50 times closer than Mercury does the sun. (As the name implies, Super-Earths are planets a bit bigger than our own, harboring from about 2 to 10 Earth masses.)

Pi Mensae c is a super-Earth, a class of planets slightly larger and more massive than our own world.

The density of Pi Mensae c is consistent with a picture where "the entire planet is made of water," study lead author Chelsea Huang, of the Massachusetts Institute of Technology, told Space.com. However, "it is more likely to have a rocky core and an extended atmosphere made of hydrogen and helium," she said. "We also think this planet might be evaporating right now, given the intense irradiation it gets from its host star."

Future research can investigate the odd configuration of Pi Mensae's two known planets. The oval-shaped orbit of Jupiter-like Pi Mensae b stands in stark contrast to the circular orbit of Jupiter. This suggests that "something must have happened in the history of this planetary system to excite the orbit of the distant Jupiter-like planet," Huang said. "If so, how did the inner system survive? These questions still need further investigation, and understanding them will tell us a lot of planet-formation theory."

TESS follows in the footsteps of NASA's iconic Kepler space telescope, which has discovered about 70 percent of the 3,800 known exoplanets to date, also using the transit method. TESS will exceed Kepler's exoplanet haul if all goes according to plan, TESS team members have said.

The scientists detailed their findings online Sept. 16 in a paper submitted to The Astrophysical Journal Letters. You can read it at the online preprint site arXiv.org.