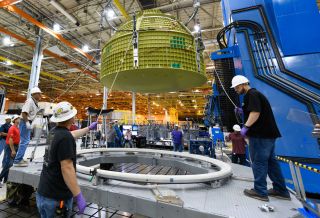 Technicians recently completed construction of a lightweight capsule made to carry astronauts back to the moon.

The capsule, also known as a pressure vessel, is part of NASA's Orion Exploration Mission-2 (EM-2). NASA plans to send crewed missions in the 2020s to the moon, and the capsule's spacecraft, the Orion Multi-Purpose Crew Vehicle, is built to take them there; EM-2 will be the second test-flight of Orion with NASA's Space Launch System rocket and the first test flight with a crew.

Technicians welded seven large aluminum-alloy pieces together over the last seven months to produce the capsule, according to a recent statement from Lockheed Martin, the contractor building the vessel for NASA.

Lockheed Martin has historically had a large presence in aerospace, from the earliest transcontinental flights to current NASA satellite and spacecraft missions. The company also manufactures weapons, and according to its website, the majority of Lockheed Martin's business is with the U.S. Department of Defense and other U.S. federal government agencies.

The vessel, according to the contractor's statement, is designed to transport a crew safely through the deep space beyond near-Earth orbit.

On Aug. 24, the EM-2 capsule arrived at Kennedy Space Center in Cape Canaveral, Florida. Lockheed Martin representatives said the vehicle traveled overland from New Orleans, where technicians and engineers worked on it inside the NASA Michoud Assembly Facility. The EM-2 capsule is now located within the Neil Armstrong Operations and Checkout Building at Kennedy Space Center. There, the mission will enter the final assembly phase for the full spacecraft.