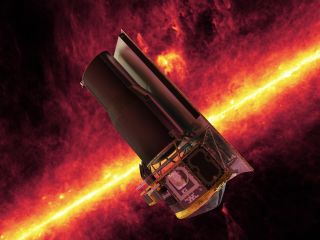 An artist's illustration of NASA's Spitzer Space Telescope. The background shows an infrared image from Spitzer of the plane of the Milky Way galaxy.
(Image: © NASA/JPL-Caltech)

The Spitzer Space Telescope launched into orbit around the sun on Aug. 25, 2003, kicking off a long and accomplished mission that has produced groundbreaking finds in a number of different fields.

"In its 15 years of operations, Spitzer has opened our eyes to new ways of viewing the universe," Paul Hertz, director of the Astrophysics Division at NASA Headquarters, said in a statement. [Gallery: The Infrared Universe Seen by Spitzer Telescope]

"Spitzer's discoveries extend from our own planetary backyard, to planets around other stars, to the far reaches of the universe," Hertz added. "And by working in collaboration with NASA's other Great Observatories, Spitzer has helped scientists gain a more complete picture of many cosmic phenomena."

The Great Observatories are four big-ticket space telescopes designed to view the universe in different and complementary wavelengths of light. In addition to the infrared-optimized Spitzer, they are the Hubble Space Telescope, which gathers data mainly in visible and near-ultraviolet light, and the Compton Gamma Ray Observatory (CGRO) and the Chandra X-ray Observatory, whose names give their specialties.

Hubble launched in April 1990, CGRO reached Earth orbit in April 1991 and Chandra was lofted in July 1999. CGRO is the only Great Observatory that's not still operating; it was intentionally deorbited in June 2000 after one of its gyroscopes failed.

Spitzer's prime mission was originally supposed to last 2.5 years but ended up going for more than twice that long. Things changed in July 2009, when Spitzer's supply of instrument-cooling liquid helium ran out, reducing the telescope's ability to study supercold cosmic objects. The observatory then switched to a "warm phase" of operations, in which it remains to this day.

The transition was not quite as dramatic as it may sound, however; two of the four cameras that make up Spitzer's primary science instrument, the Infrared Array Camera, are currently operating with the same sensitivity that they did during the telescope's "cold phase," NASA officials said. (Spitzer has two other scientific instruments: the Infrared Spectrograph and the Multiband Imaging Photometer for Spitzer.)

During its 15 years in space, Spitzer has observed some of the most distant galaxies in the universe, helped astronomers tease out the details of star birth and compiled one of the most complete maps of the Milky Way ever constructed.

The telescope has also been instrumental in the discovery of a number of alien worlds, including the seven rocky planets in the TRAPPIST-1 system, which lies a mere 39 light-years away from Earth. Scientists think that three of these seven planets might be capable of supporting life as we know it. And Spitzer's observations helped astronomers put together the first-ever weather map for an exoplanet, back in 2007.

Indeed, alien planets have been a major focus for Spitzer lately.

"The study of extrasolar planets was still in its infancy when Spitzer launched, but in recent years, often more than half of Spitzer's observation time is used for studies of exoplanets or searches for exoplanets," Spitzer project manager Lisa Storrie-Lombardi, of NASA's Jet Propulsion Laboratory in Pasadena, California, said in the same statement. "Spitzer is very good at characterizing exoplanets, even though it wasn't designed to do that."

Spitzer is in good shape, mission team members say, and it's scheduled to keep operating through at least November 2019. Whenever the spacecraft's health begins to fail, there will be no astronaut missions to save it; unlike the Earth-orbiting Hubble, which has been repaired and upgraded on multiple occasions, the sun-circling Spitzer is millions of miles away from its home planet.