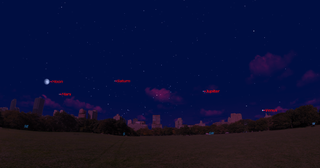 The four brightest planets in the sky line up for convenient skywatching about an hour after sunset local time on Aug. 23, 2018.
(Image: © Starry Night software)

Why settle for a planet or two when you can catch all of them in just one night of intense skywatching?

Tonight (Aug. 23) and for a brief period in early September, that feat is surprisingly doable for people living in midnorthern latitudes like the U.S. All you need is a little planning and cooperative weather. And you don't even need to sacrifice a whole night's sleep.

"You can see the majority of the sky on any night of the year if you stay up all night long, so only having to stay up half the night is kind of a treat," Irene Pease, vice president of the Amateur Astronomers Association of New York, told Space.com. "It's cool to be able to say that you've seen all of the planets, but then to have the street cred to be able to say, 'Oh, I saw them all in one night,' is just a kind of neat bucket-list thing." [The Brightest Planets in the August Night Sky (and How to See Them)]

First, pick a date. While the planets are aligning well through early September, the brightness of the full moon, which peaks on Aug. 26, will make skywatching on the surrounding nights more challenging. Sky and Telescope recommends trying to catch the planets before Aug. 24 or between Aug. 30 and Sept. 9.

For Pease, Mercury is always the hardest planet to spot because it is so close to the sun. "The trick to Mercury is getting out there before the sun sets and making sure you have a really clear view of the horizon," Pease said. "Just being able to see that in the glare of the sunset can be kind of tricky."

But after that, it gets easier. Next come the four particularly bright planets: Venus, Jupiter, Saturn and Mars. These four will line up with Venus low in the western sky, Jupiter to the southwest, Saturn to the south and Mars to the southeast.

"You can get all of those in within an hour of a sunset," Pease said. "Then, I would take a break, maybe celebrate, and then come back."

The final stops on your whirlwind planet tour will be Uranus and Neptune, for which you'll want to arm yourself with at least binoculars or, ideally, a small telescope. Both planets are far enough away that they might be tricky to distinguish from stars. According to Sky & Telescope, they'll be easiest to catch just before midnight in the constellations Pisces and Aquarius respectively.

As usual, you'll want to find someplace with relatively dark skies and keep an eye on the weather forecast to avoid cloudy conditions. "Bring a buddy, because it's more fun, and bring bug repellent if you're one of those people bugs love to eat," Pease said. She also recommended using a skywatching app like SkySafari that can help you tailor your observations to your location or looking up a detailed star map to help you find the more distant planets Uranus and Neptune.

Just don't get so caught up in catching the wandering stars that you forget to look down at the Earth holding you up to round out your total planetary haul of the solar system.