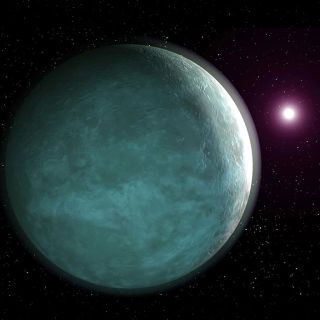 An artist's image of an exoplanet with a bulging atmosphere.
(Image: © NASA)

It turns out, exoplanets can be as sweet as a trip to the state fair: Two worlds discovered by NASA's Kepler Space Telescope have about the same density as a package of cotton candy. The two planets, which orbit a young star only about 500 million years old, are newborn worlds nearly as wide as gas giants, though they weigh in at less than 10 times the mass of Earth.

Using NASA's Hubble Space Telescope, researchers made follow-up observations of the two "delicious" worlds, known as Kepler-51b and Kepler-51d. They found that the bloated atmospheres of the worlds most likely contained a haze stretching high above their surface. The worlds' expanded atmospheres placed them in a rare class of exoplanets, the super-puffs.

"These are the lowest-density exoplanets to date," Jessica Roberts said last month. She presented the preliminary results during the 232nd semiannual meeting of the American Astronomical Society in Denver. A graduate student at the University of Colorado, Boulder, Roberts helped sleuth out an Earth-like comparison for the planets. She found an unusual analogue for the super-puffs — a sweet treat. [The Most Intriguing Alien Planet Discoveries of 2017]

"I want you to picture giant planets made of cotton candy," she said.

In 2011, Kepler spotted a low-density world orbiting the young star Kepler 51; later studies confirmed the planet had two siblings. All three planets have a bulging atmosphere, and the initial observations suggested their low densities.

The super-puffs caught the attention of Roberts' doctoral adviser at Boulder, Zachory Berta-Thompson, who suspected that the bloated atmospheres would be easier to study than the more settled atmospheres around other worlds. Along with several colleagues, the scientists used Hubble to probe the chemistry of the atmospheres of 51b and 51d as the pair passed twice between their star and Earth. The third world, 51c, only clipped the edge of the system's sun, keeping its atmosphere hidden, and so was not part of the new study.

The researchers found that both planets produced a signal suggesting tiny particles called aerosols dominated the atmospheres. These aerosols could be created by massive cloud banks, or they could be the sign of a planet-encircling haze.

In the solar system, Saturn's largest moon, Titan, is the only one to be dominated by a haze layer made of hydrocarbons, most likely methane and ethane. The massive moon may provide insight into the super-puffs, which could bear an extended version of the haze.

"We might be looking at some really fluffy Titans," Roberts said. [Twilight Haze Shines Over Saturn's Big Moon Titan in Gorgeous Cassini Photo]

Calculating the density of a planet requires a return to high school physics. The density of an object is its mass divided by its volume; the volume is determined by its radius. Hubble's precise measurements helped the researchers to better constrain the mass of the exoplanets. To find their radius — and thus their volume — scientists compare the size of the planet to its star. By revisiting what was known about the star, Roberts and her colleagues were able to determine a more precise radius.

Kepler-51b has a mass about twice that of Earth and a radius about seven times larger, and it orbits its star every 45 days. With its 130-day orbit, Kepler-51d is a bit larger, about 7.5 times as massive as Earth with a radius nearly ten times that of our planet. The third sibling, Kepler-51c, takes 85 days to travel around the star and has about four times the radius of Earth.

By combining the updated mass with the revised radius, the researchers could calculate that the densities of the planets ranged from 0.03 grams to 0.06 grams per cubic centimeter. That's a tenth as dense as Saturn, the solar system's least dense planet, and one that would float in water if you could find a bathtub big enough.

Figuring out what that would mean in real-world terms would take a bit more work, but Roberts was determined.

Her first thought was of marshmallows. She melted a batch in the microwave but found the white treats were still too dense.

"That was just a horrible mess," she told Space.com.

For her cotton-candy deductions, she headed to a grocery store and bought containers of cotton candy. The freshly spun material wasn't dense enough, but she hoped the prepackaged tubs might work. She measured the volume of the container and weighed the material to calculate its density, which was a close match for the super-puffs.

"I bought so many of these tubs, the [cashier] was like, you must be a cotton candy fan," Roberts said.

Why are these worlds so dense? Roberts thinks that their youth may play a key role. Planets form as dust and rocks collide to build a world. When the rocky core is massive enough, its gravity pulls in lighter gas to create an atmosphere.

According to models, the three super-puffs formed outside the snow line of their system, the invisible boundary around central stars where gas is cold enough to condense into ice. The planets then migrated inward, reaching their current orbits. As they moved closer to the warm star, their ice melted and created a gaseous atmosphere that begins to bulge.

While planets start off warm from the collisions that formed them, they cool down over time, causing a contraction of material. At the same time, stellar winds strip off some of their atmosphere. According to Roberts, models suggest that in the next 5 billion years, when it's a bit older than Earth is today, 51b will look more like a typical Neptune planet. Because it's farther away from the star, she said that "51d will likely be a bit of an oddball, because it's not having as much of its atmosphere stripped."

"In a few billion years, we'll see these planets smaller than they are now," Roberts said.

If you could stand on one of the super-puffs (assuming it has a rocky surface), the pressure of the atmosphere would probably be crushingly high, Roberts said. You'd be better off floating around higher in the atmosphere where pressure would be lower, she added.

Early in its lifetime, Earth probably boasted its own bloated atmosphere, she said, though it probably lost it very quickly.

The scientists plan to submit their research for publication later this summer.

Now we just need the sweet worlds to sport cotton-candy colors, such as blue, pink, purple or green!