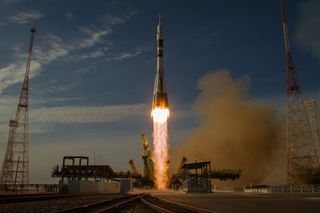 A Russian Soyuz spacecraft launches from the Baikonur Cosmodrome in Kazakhstan, carrying new crewmembers toward the International Space Station in 2012.
(Image: © Bill Ingalls/NASA)

I spent several days in June traveling with a group of journalists to watch the Expedition 56 crew launch to the International Space Station (ISS). To do so, we had to make our way to Moscow, get picked up by a charter airline, and fly to the remote desert town of Baikonur, Kazakhstan.

We wrapped up our trip on June 8 in Moscow when the crew successfully docked with the ISS. At that time, a small group of officials representing NASA, Europe and the Russian space agency Roscosmos congregated in TsUP (Russian Mission Control) to talk about the mission.

But when asked about the future, the conversation suddenly turned vague. The consensus: Discussions are ongoing and the public will have to wait. [Roscosmos: Russia's Historic Space Centers in Pictures]

No NASA commitment past 2019

All people going to the International Space Station must do so through Kazakhstan today. Since the space shuttle retired in 2011, there's no other ship capable of carrying people up there besides Soyuz, the Russian workhorse of many decades. NASA purchases seats for its astronauts; each mission is worth tens of millions of dollars. But the situation is going to change soon.

Two companies — Boeing and SpaceX — are developing commercial crew vehicles to carry astronauts to the ISS. They should start flying crews in the next year or two, at least if the current development schedule holds. And NASA hasn't committed to buying any seats past 2019, several officials told me while I was in Moscow. That made me wonder — what is the future of Roscosmos with less money flowing from international partners?

"This will certainly pose a problem for the agency in terms of its funding, for which it has been struggling of late," Michael Dodge, a space law and policy researcher at the University of North Dakota in Grand Forks, told Space.com in an email. "The United States pays a great deal of money for each seat it takes on the Soyuz, which helps to offset the expenses of preparing, maintaining and launching that vehicle. Of course, Russia has its own interests to support onboard the ISS, and will still need to launch its cosmonauts to the station until it decides it no longer wants to engage in operations there.

"If the number of launches they need to make remains stable compared to current schedules, they could see a sizable increase in costs of operation, as they would be launching the spacecraft without paid-U.S. seats. On the other hand, they would be able to increase the number of cosmonauts that are brought back from and taken to the station," Dodge said. [Touring Baikonur: The Town Behind the Famed Cosmodrome in Kazakhstan]

Looking beyond the ISS

The Trump administration committed to ISS funding until 2024, but the latest budget request has no money for the space station past then. That's so that NASA can focus its resources on the Deep Space Gateway, a lunar space station that plays a part in the administration's request to send astronauts to the moon again before going on to Mars.

The Europeans have expressed some interest in the Deep Space Gateway, but as for Roscosmos, their direction is unclear. The agency could join NASA on another space station, go on its own, or ally itself with newer space powers (such as China) for other work, Dodge said.

"President Trump has noted that he would like to see cooperation between states [nations] in outer space, so it remains to be seen if the U.S. would be interested in securing Russian partnership at some point in the future, or whether Russia would want to partake if asked (given the possibility they may wish to create their own station)," Dodge said. "In the meantime, Russia may form a stronger bond with China, which, as an emerging space power in its own right, may be interested in courting Russian expertise in both engines and launch procedure."

A new person was recently appointed to lead Roscosmos, according to multiple media reports — Dmitry Rogozin, who used to be the Russian government "point-man" for the defense and space industries, as Space News put it. He's best known in U.S. circles for a tweet in 2014, written amid Western sanctions after Russian military activities in Crimea. Referring to the fact that NASA depends on Roscosmos to launch astronauts, Rogozin suggested NASA should use trampolines to send its astronauts to the ISS.

Rogozin takes over at a time when Roscosmos is trying to increase the launch rate at Vostochny, its new launch complex in the Far East. The complex has had its share of construction problems, and already one rocket failure in its young history. Vostochny is supposed to eventually replace Baikonur, which would put Russian launches on Russian soil. Currently, Russia pays a yearly rental fee (7.2 billion rubles, or $115 million) to Kazakhstan to use the Baikonur Cosmodrome.

"A new leader signals a change for Roscosmos, and with Dmitry Rogozin in the post, it likely means that Russian leadership desires someone with extensive experience in managing government space affairs to take control of what has been perceived — fairly or not so — as a rocky start with current operations at the new cosmodrome," Dodge said. He added that U.S. observers shouldn't have "too much angst" about Rogozin's past comments about NASA, because the Russian and U.S. space programs have continued cooperating for the past four years despite their disagreements over Crimea.