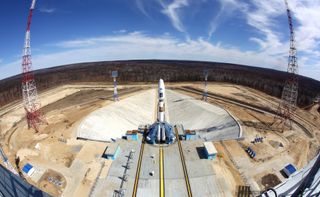 Vostochny Cosmodrome is a Russian rocket launch site in the far east of the country, about 3,500 miles (5,500 kilometers) from Moscow. The first launch from the cosmodrome took place in 2016.

In the long term, Russia hopes to launch most of its space missions from Vostochny to reduce its dependence on the Baikonur Cosmodrome, which Russia has leased from Kazakhstan since the collapse of the Soviet Union in the 1990s. But Russia has a signed lease at Baikonur until at least 2050, providing decades of time to accomplish the transition.

From Baikonur to Vostochny

Baikonur is a location of much Russian space history, beginning with Sputnik-1 and Yuri Gagarin. The first satellite and the first human in space launched from the site. It has been the site for all Soyuz launches, and continues to launch astronauts from many countries to the International Space Station.

When the Soviet Union officially dissolved in December 1991, and Kazakhstan became an independent nation, the now Russian space program had a problem: cosmonaut Sergei Krikalev was in space at the time of the collapse. His return was delayed as Russia and Kazakhstan worked out the status of Baikonur and the Russian space station Mir.

Shortly afterwards, Russia began leasing Baikonur from Kazakhstan, and the frequency of foreign astronaut launches increased as permanent settlement on the International Space Station was established in 2000. Starting in 2011, all ISS human launches took place from Baikonur after the U.S. space shuttle retired.

However, the Russians wanted to launch humans from their own soil. Although they do have another cosmodrome called Plesetsk, its position on Earth is more suited for high-inclination or geostationary launches and not launches to the ISS.

At one time, the Russians considered opening another launch area in their country called Svobodny, according to RussianSpaceWeb (a website run by journalist Anatoly Zak). But the idea collapsed due to a lack of funds. Vostochny only emerged as a possibility after oil prices rose, improving the fortunes of the Russian economy.

Russian president Vladimir Putin approved the construction of Vostochny in 2007, and the budget from the Russian government followed in 2009. In a public statement in 2010, Putin said officials had discussed building a space center on Russian soil since 2005.

"The creation of a new space center … is one of modern Russia's biggest and most ambitious projects," Putin said in a report in RIA Novosti and republished in Sputnik News. "It will give us the opportunity not only to confirm Russia's leading technological status … but will give hundreds, perhaps thousands, of young specialists the chance to prove their talents."

Cosmodrome construction on Vostochny began in January 2011 and was expected to wrap up in 2018, with an estimated cost of $7.5 billion, according to multiple news reports. Initially, Vostochny was supposed to host launches of Rus-M, a next-generation rocket for crewed spaceflight. But the program was stopped in 2011, with officials saying they already had the rockets they needed to send humans aloft. Vostochny's launch facilities were then modified to support the current Soyuz rocket, according to RussianSpaceWeb. [Russia's New Spaceport: Vostochny Space Launch Center in Photos]

The construction of Vostochny also required several nearby facilities, including a town for the workers, an airport, drop zones for the spacecraft stages and a processing area, among other facilities. During construction in 2015, several spaceport workers began striking because they had not been paid, according to Radio Svoboda.

The strike took place around the same time that declines in Russia's economy forced cutbacks to the space program, CNN reported, but Putin was also said to be taking control of Vostochny's construction personally after hearing about the worker issues. In 2018, Yury Khrizman — the former construction company head that managed the Vostochny build — was sentenced to 12 years in prison following allegations of corruption at Vostochny.

As of May 2018, Vostochny has hosted three launches. The first one occurred on April 28, 2016, when a Soyuz-2 rocket launched a gamma ray-astronomy satellite called Mikhailo Lomonosov. The second launch on Nov. 28, 2017, did not end successfully. A Soyuz-2.1b failed to put Meteor-M (a Russian polar-orbit weather satellite) into the correct orbit, along with several secondary satellites. The cause was later traced to a programming error. On Feb. 1, 2018, a Soyuz 2.1a successfully launched three satellites: S-Net, Lemur and D-Star One.