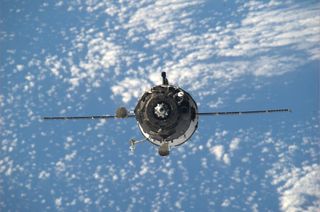 A member of the Russian government suggested Tuesday (April 29) that the United States use trampolines to get to the International Space Station instead of the Russian rockets they currently rely on, according to press reports.

"After reviewing the sanctions against our [Russian space industry], [I] suggest [that the] United States deliver their astronauts to the ISS [International Space Station] using a trampoline," Deputy Prime Minister Dmitry Rogozin posted from his Russian-language Twitter account.

The United States has been introducing a number of sanctions against Russia related to the country's annexation of the Ukrainian region of Crimea earlier this year. While Rogozin's words are harsh, they also might not lead to action, according to Reuters. According to analysts cited by the news agency, Russia is unlikely to kick NASA astronauts off Russian-made Soyuz rockets and Soyuz spacecraft — the only vehicles that currently fly NASA astronauts to the space station.

For his part, NASA chief Charles Bolden has maintained that the relationship between Roscosmos and the U.S. space agency is still amicable, despite heightened tensions between the two governments.

Elon Musk, the founder of the private spaceflight company SpaceX — which is currently developing technology that could ferry astronauts to and from the space station from the United States — also added his voice to the fray on Twitter. "Sounds like this might be a good time to unveil the new Dragon Mk 2 spaceship that @SpaceX has been working on w @NASA," Musk wrote of the company's manned Dragon capsule currently in development. "No trampoline needed."

Musk plans to unveil the new Dragon design on May 29.