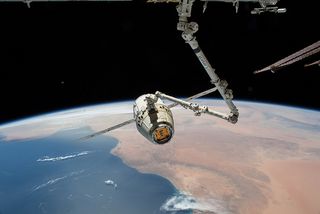 A SpaceX Dragon cargo craft is pictured in the grips of the Canadarm2 robotic arm as the International Space Station (ISS) was orbiting above northern Africa on May 5, 2018. Another Dragon is scheduled to launch toward the ISS on June 29, 2018.
(Image: © NASA)

SpaceX will launch a new resupply mission to the International Space Station early Friday (June 29), and you can watch the spaceflight action live online.

A two-stage SpaceX Falcon 9 rocket topped with the company's robotic Dragon cargo capsule is scheduled to lift off from Florida's Cape Canaveral Air Force Station Friday at 5:42 a.m. EDT (0942 GMT). You can watch the launch here at Space.com, courtesy of NASA TV, beginning at 5:15 a.m. EDT (0915). You can also watch it live directly via NASA TV, or via SpaceX's website.

The weather looks good for the predawn launch; there's currently just a 10 percent chance of a weather-related scrub on Friday morning, Air Force officials said during a press conference today (June 28). SpaceX is investigating a possible issue with one of the Dragon's thermal-protection panels, but the company is still preparing for an on-time launch, SpaceX representatives said during the press conference. If Friday's liftoff gets called off for whatever reason, the next opportunity is early Sunday morning (July 1). [The Evolution of SpaceX's Rockets in Pictures]

The Dragon is loaded with about 5,900 lbs. (2,700 kilograms) of supplies and scientific gear, including a floating droid with a face called CIMON, an investigation of nanotube-growth physics and an instrument designed to monitor the health of Earth vegetation from space. Space station crewmembers will unpack all this stuff when the freighter arrives at the orbiting lab early Monday morning (July 2).

Friday's launch kicks off SpaceX's 15th contracted cargo flight to the space station for NASA with its Dragon spacecraft. The California-based company holds a multibillion-dollar deal with the space agency to provide such delivery services, as does Northrop Grumman, which uses its Cygnus spacecraft and United Launch Alliance Atlas V rockets to get the job done. (Northrop Grumman recently acquired Orbital ATK, the Virginia-based company that signed the cargo contract with NASA.)

Both vehicles lifting off Friday are flight-proven; the Falcon 9's first stage helped launch NASA's Transiting Exoplanet Survey Satellite in April, and the Dragon flew a cargo mission to the space station in July 2016, SpaceX representatives said. Such reuse is part of SpaceX's plan to slash the cost of spaceflight, thereby making grand exploration goals such as Mars colonization economically feasible.

The Falcon 9 first stage is a "Block 4" variant, which SpaceX is phasing out in favor of the recently debuted "Block 5." The booster is therefore not expected to make another landing after liftoff Friday.

Editor's Note: This story was updated at 2 p.m. EDT to include details from a prelaunch briefing.