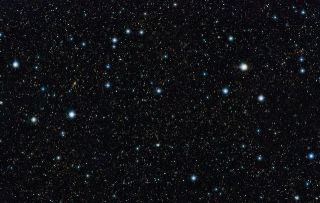 The COSMOS field in the constellation of Sextans is seen here in infrared light. This region is associated with the part of the sky analyzed by David Sobral of Lancaster University and his research team.
(Image: © ESO/UltraVISTA team/TERAPIX/CNRS/INSU/CASU)

Astronomers have produced one of the largest 3D maps of the young universe, where they pinpoint 4,000 early galaxies from the ancient past — many of which may resemble the Milky Way in its infancy.

The researchers can look into the past like this because of the time it takes light to travel large, cosmic distances. Light quickly fills a room when a lamp turns on, but the light from faraway galaxies can take billions of years to reach the eyes of an observer standing on Earth. So, the objects or events someone sees through a telescope may have actually happened eons ago. Telescopes, therefore, can act as time machines for scientists.

"We used large amounts of data ... to literally slice the universe in cosmic time and time-travel to the distant past with 16 well-defined cosmic-time destinations," said Sergio Santos, a team researcher at Lancaster University in the United Kingdom, in a recent statement about the findings. [26 Cosmic Photos from the Hubble Space Telescope's Ultra Deep Field]

In two new studies, the team of astronomers peered back in time to 16 different epochs between 11 billion and 13 billion years ago. They found light coming from galaxies that existed when the universe was only 7 percent to 20 percent of its current age, the statement said.

To pinpoint these ages, the researchers looked at universal expansion. In general, scientists use the expansion of the universe to determine from which epoch, or from how long ago, light originates. As the universe expands, the light traveling from any one of these 4,000 galaxies gets stretched on its journey to Earth. This caused the wavelength of the light to become redder, a phenomenon known as redshift. Because the redshift is tied to how far away a galaxy is, researchers can use filters to measure particular wavelengths of light and then deduce how far back in time the light is coming from.

David Sobral, an astrophysics researcher at Lancaster University, led the team of scientists in their work charting out the primitive universe. They spotted these early galaxies using the Subaru Telescope in Hawaii and the Isaac Newton Telescope in the Canary Islands off the coast of northern Africa.

The team searched for distant galaxies emitting Lyman-alpha radiation, an ultraviolet wavelength associated with young galaxies bursting with star formation. Using 16 different narrow- and medium-band filters, the Lancaster-led team of researchers studied the ancient galactic past in a region of the sky in the constellation Sextans, in an area called the COSMOS field.

Their findings provide insights about the early stages of galaxy formation, the researchers said. They found young worlds that were intensely compact and bursting with stars that were bluer and hotter and that had lower amounts of metal elements compared to the stars of today.

"Some of these galaxies should have evolved to become like our own, and thus we are seeing what our galaxy may have looked like 11 [billion] to 13 billion years ago," researcher Ana Paulino-Afonso, a Ph.D. student in Lancaster and Lisbon, Portugal and co-author on the study, said in the statement.

"The bulk of the distant galaxies we found are only about 3,000 light-years across in size, while our Milky Way is about 30 times larger," Paulino-Afonso added. "Their compactness likely explains many of their exciting physical properties that were common in the early universe."

The work was announced today (April 4) at the European Week of Astronomy and Space Science conference in Liverpool, England. The team also published their findings in two papers in the journal Monthly Notices of the Royal Astronomical Society.