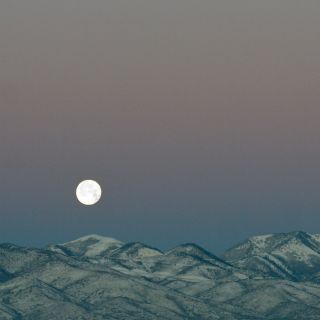 The second Blue Moon of the year and the second full moon of March will rise this weekend — and you can watch the event in a live web broadcast from Slooh's online observatory.

The Full Sap Moon will rise at 8:37 a.m. EDT (1237 GMT) Saturday (March 31). This full moon follows the March 1 Full Worm Moon, making it a Blue Moon — the name given to the second full moon to occur in a single calendar month. But what makes this weekend's full moon extra special is that it is the last Blue Moon until Halloween 2020.

The astronomy broadcasting service Slooh will host a live webcast here Saturday, starting at 4 p.m. EDT (2000 GMT). You can also watch the webcast on Space.com, courtesy of Slooh. [The Moon: 10 Surprising Lunar Facts]

Tomorrow's Blue Moon is known as the Full Sap Moon because it marks the time of year when maple sap begins to flow and the annual tapping of trees begins. Although the moon will reach peak fullness at 8:36 a.m. EDT on March 31, observers won't be able to see the moon, as it will be below the horizon at that time.

Therefore, the best viewing opportunity will be early tomorrow, at 7:03 a.m. EDT, just before the moon sets in the sky. However, the moon will still look pretty full when it rises tomorrow at 7:37 p.m. EDT.

In addition to being the second full moon of March, the Full Sap Moon is the second Blue Moon of the year. (The first Blue Moon of 2018 was the spectacular "Super Blue Blood Moon" of Jan. 31.) The occurrence of two Blue Moons in a row is actually a rare celestial event that astronomers call a "Double Blue Moon," according to Slooh.

In fact, a Double Blue Moon is seen only about three or five times per century. The last time this event occurred was in 1999, and the next Double Blue Moon won't be seen until 2037, Slooh representatives said in a statement.

Generally, a full moon occurs each month when the sun, Earth and moon line up, with the Earth in between the two. However, February didn't have a full moon because it is a shorter month.

"The lunar phase calendar takes 29.5 days to complete the cycle, which is why we roughly have one full moon per month," Slooh representatives said in the statement. "But since some months are 30 or 31 days long and February is shorter, we occasionally have a Full Moon-less February."

As a result, there are two full moons in March this year — one of which is the extraordinary Double Blue Moon this Saturday.

Editor's note: If you captured an amazing photo or video of the total lunar eclipse and would like to share it with Space.com for a story or gallery, send images and comments to spacephotos@space.com.