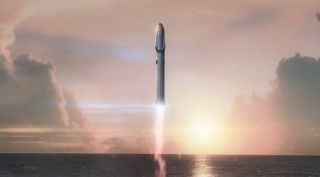 SpaceX is negotiating with the Port of Los Angeles to build a facility there for manufacturing "large commercial transportation vehicles," according to documents on the Los Angeles Board of Harbor Commissioners website.

SpaceX currently builds all of its rockets and spaceships at the company's headquarters, in the Los Angeles suburb of Hawthorne. So speculation is swirling that the new Port of LA facility will focus on the BFR (Big Falcon Rocket, or Big F***ing Rocket), which SpaceX is developing to get people to Mars and other destinations throughout the solar system.

What we know about SpaceX's plans is laid out in a March 15 agenda for a special meeting of the Los Angeles Board of Harbor Commissioners. SpaceX requests a 10-year lease, with up to two renewals of 10 years each. The goal is to construct and operate a facility "to manufacture large commercial transportation vessels," the documents state. The project would encompass 18 acres (7.3 hectares) on Terminal Island (an artificial island near San Pedro and Long Beach) on the former site of Southwest Marine, which manufactures components for powerboats. [The BFR: SpaceX's Mars-Colonization Architecture in Images]

"The site is entirely disturbed with abandoned industrial buildings, unused compacted dirt area, and paved areas," read the agenda. "Operation would involve research and development of transportation vessels, and would likely include general manufacturing procedures such as welding, composite curing, cleaning, painting, and assembly operations. The majority of operations would take place inside the facility, with exterior operations limited to transit of vehicles, forklift traffic, and mobilization of manufactured products onto a barge at the dockside for testing and delivery."

The agenda further states that completed vehicles "would need to be transported via water due to their size; thus there is the need to locate the facility immediately adjacent to the water." That would seem to describe the BFR, a rocket-spaceship combo that will be 348 feet (106 meters) tall by 30 feet (9 m) wide, if present designs hold. (SpaceX's current flying rockets, the workhorse Falcon 9 and the newly debuted Falcon Heavy, can travel overland.)

Last week, the board voted to approve California Environmental Quality Act regulations that are needed before greenlighting the project, the Los Angeles Times reported. The board will later vote on a lease to approve the project, but the date of that vote has not yet been released.

The board further states that the project "would not have a significant effect on the environment," but adds it will implement standard oversight measures to ensure SpaceX is compliant with environmental regulations.

SpaceX uses the Falcon 9 rocket for satellite launches, and the booster also regularly launches the company's robotic Dragon cargo capsule to the International Space Station for NASA. (SpaceX is also prepping to take astronauts to and from the orbiting lab with a crewed version of Dragon; the first crewed test flight is expected late this year, SpaceX representatives have said.)

But the Heavy may not fly for long. In September 2017, SpaceX founder and CEO Elon Musk said the plan is to replace both the Falcon 9 and Falcon Heavy with the BFR system in the 2020s.