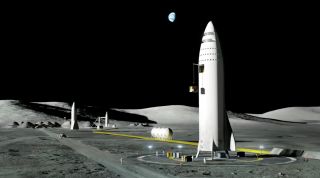 SpaceX plans to eventually phase out the big rocket, which has yet to fly, as well as the Falcon 9 booster and Dragon capsule to concentrate on the Mars-colonizing BFR system, company founder and CEO Elon Musk announced Friday (Sept. 29).

The move should make it possible for SpaceX to afford the BFR's development, he said. [The BFR: SpaceX's Mars-Colonization Architecture in Images]

"If we can do that, then all the resources that are used for Falcon 9, Heavy and Dragon can be applied to this system," Musk said at the 68th International Astronautical Congress (IAC) in Adelaide, Australia, where he unveiled SpaceX's latest Mars-colonization architecture. "That's really fundamental."

This doesn't mean that SpaceX will be focused exclusively on Mars after the BFR — a huge, reusable rocket-spaceship combo — is up and running. The new system will be flexible, and the company will therefore use it for all manner of missions, from lofting satellites to resupplying the International Space Station to cleaning up space junk.

Musk also envisions the BFR (whose name is short for Big F***ing Rocket) helping humanity set up an outpost on the moon, and perhaps even ferrying people from place to place here on Earth.

"Most of what people consider to be long-distance trips would be completed in less than half an hour," Musk said. Such point-to-point Earth jaunts would likely cost about as much per seat as an economy-class airplane ticket, he added in an Instagram post on Friday.

SpaceX aims to launch the first BFR Mars cargo mission in 2022 and send the first people toward the Red Planet in 2024, Musk said during his IAC talk. But that doesn't necessarily mean all of the company's old-guard gear will be grounded by then.

"Some of our customers are conservative, and they want to see BFR fly several times before they're comfortable launching on it," Musk said. "So what we plan to do is to build ahead and have a stock of Falcon 9 and Dragon vehicles, so that customers can be comfortable — if they want to use the old rocket, the old spacecraft, they can do that, because we'll have a bunch in stock. But all of our resources will then turn towards building BFR."

The BFR is an updated version of the Interplanetary Transport System (ITS) architecture that Musk announced at last year's IAC, in Guadalajara, Mexico.

When stacked together, the BFR rocket and spaceship will stand 348 feet (106 meters) high. The rocket will be the most powerful ever built, capable of launching 150 tons to low-Earth orbit; the spaceship will likely carry about 100 people to Mars on each trip. Both vehicles will launch and land many times over the course of their operational lives.

The newly announced BFR system is a bit scaled-back compared with the ITS concept that Musk unveiled last year; the rocket will feature 31 Raptor engines rather than 42, for example. But the most important change in the architecture involves the eventual phaseout of the Falcon 9, Falcon Heavy and Dragon, the billionaire entrepreneur said.